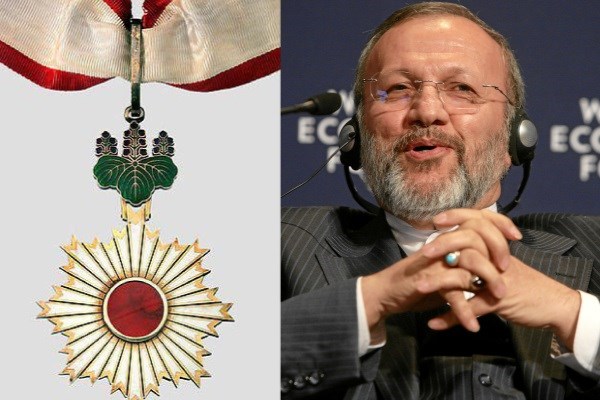 Iran’s former foreign minister Manouchehr Mottaki has received the Grand Cordon of the Order of the Rising Sun, the highest accolade of Japan’s emperor.

He received it from the Japanese emperor and prime minister in a special ceremony on Tuesday, according to a Farsi report by ISNA.

As Iran’s ex-ambassador to Tokyo and former foreign minister, Mottaki played a pivotal role in boosting friendship and enhancing relations between Iran and Japan, wrote the Japanese Embassy in Tehran on its Persian-language website.

When Mottaki was serving as Iran’s ambassador to Japan from 1995-1999, he contributed to promotion of Tehran-Tokyo ties on different fronts.

One of Mottaki’s legacies is Iranian Cultural Week celebrated by the Iranian embassy in Japan.

When he was Iran’s foreign minister from 2005 and 2010, Mottaki visited Japan three times and made utmost efforts to further boost mutual ties.

Mottaki travelled to Tokyo at the official invitation of Japanese Premier Shinzo Abe to attended the ceremony where he received the accolade.