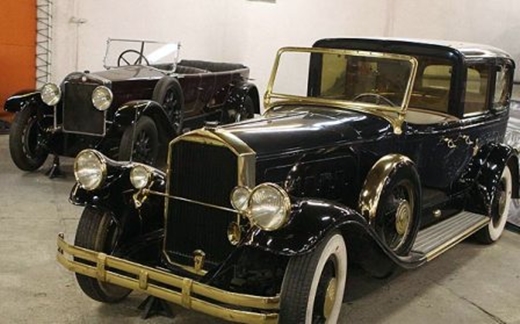 On January 11, registration documents for classic cars in Iran were unveiled with Director of the Cultural Heritage, Handicrafts and Tourism Organization Masoud Soltanifar in attendance. The following is the translation of a report the Islamic Republic News Agency (IRNA) filed on the ceremony:

During the ceremony at Niavaran Palace Complex which brought together a number of classic car collectors and officials with the Touring and Automobile Club of the Islamic Republic of Iran (TACI), the efforts of three collectors who have contributed to maintaining classic cars were appreciated.

Also, 50 classic cars which were among the first to have been granted a registration document were put on display and the endeavors of five owners [to maintain classic cars] were praised.

In 2010 a working group led by the Cultural Heritage, Handicrafts and Tourism Organization was tasked with locating and maintaining classic cars, said deputy director of the organization Mohammad Hassan Talebian, adding, “Unfortunately, a large number of Iran’s classic cars have either been scrapped or taken out of the country and ended up in collections abroad.”

Talebian stated that the transfer of classic cars beyond Iran’s national borders has now stopped.

He went on to say, “So far, as many as 300 classic car collectors have been identified out of which for 60 licenses have been issued.”

The move to issue registration documents for classic cars is aimed at preserving this cultural heritage, Talebian concluded.

TACI President Abdolghasem Iraji presented a report about the measures the working shop has taken to identify and maintain classic cars and said, “A considerable number of the country’s 15,000 classic cars have either been scrapped or taken out of the country, creating an alarming trend that has worried classic car owners and fans.”