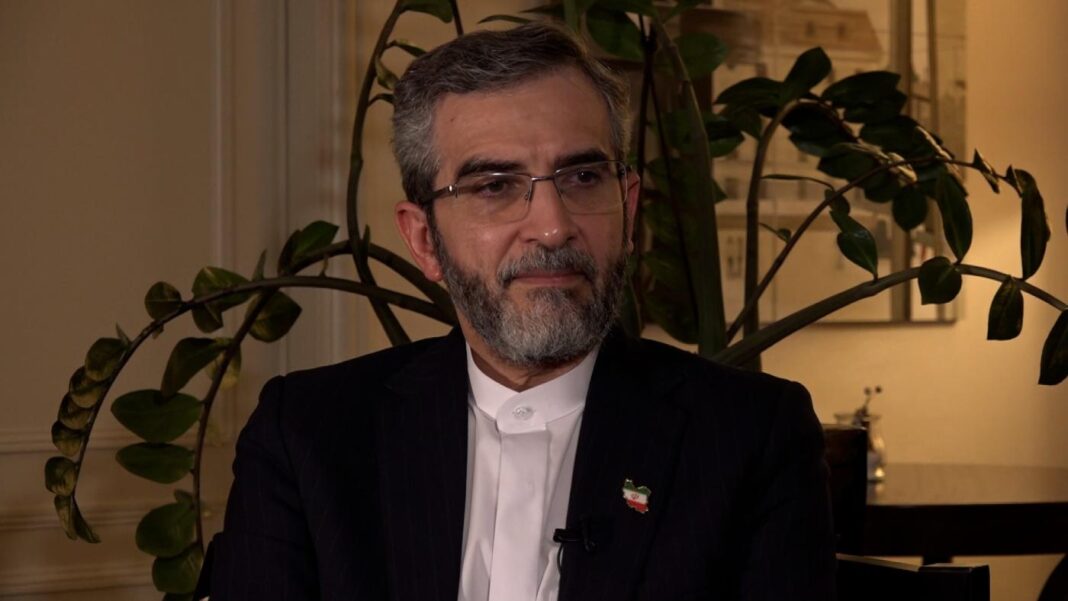 Iran’s top negotiator and Deputy Foreign Minister Ali Bagheri says the ball is in the court of the United States over nuclear dispute, and Washington must remove the anti-Tehran sanctions.

Iran has tabled two draft documents in the highly fraught nuclear negotiations in Vienna demanding all sanctions imposed by former US President Donald Trump be removed.

The move will likely lead to a blame game, as Iran and the United States seek to revive the 2015 nuclear agreement.

The European states attending the talks are expected to request an adjournment, informed sources told MEE, the second time in three days that they have done so.

But the Iranian delegation wants to stay, saying the differences between parties should be hammered out around the table in Vienna.

In his first interview since the talks began on Monday, Bagheri told Middle East Eye that the onus was on the US, not Iran, to come to the table.

Iran feels under no pressure to strike a deal over its nuclear enrichment programme, Bagheri stated, adding that the ball was squarely “in America’s court”.

Bagheri insisted that it was now up to US President Joe Biden to return to full compliance and lift sanctions, as Washington was the one to unilaterally walk away from the treaty in 2018.

Iran has stressed the US was in breach not only of the Joint Comprehensive Plan of Action (JCPOA), but also a UN resolution and international law.

However, Bagheri insisted that Iran was deadly serious about the negotiations and highlighted the fact that he has 40 top officials with him in the Austrian capital.

The deputy foreign minister dismissed recent suggestions that Iran was considering an interim deal, the so-called “less for less” plan, or that his country would contemplate a “JCPOA plus”, which would include the start of negotiations about Iran’s ballistic missile force or its regional involvement.

Biden made returning to the JCPOA the centrepiece of his administration’s Middle East policy, but has so far maintained the range of sanctions imposed by Trump to exert “maximum pressure” on Iran.

Talks between Iran and the G4+1 nations of Britain, France, China, Russia and Germany resumed in Vienna this week after a delay of five months, following the election of hardline President Ebrahim Raisi in Iran.

Since Trump’s unilateral withdrawal from the pact designed to curb Iran’s nuclear capabilities and ambitions, Iranian negotiators have refused to meet their US counterparts face to face.

The Iranian and the G4+1 delegations are in the Palais Coburg hotel, with messages sent along Vienna’s empty and draughty streets by EU officials to Americans waiting in the Marriott.

The US is insisting on Iran’s full compliance with the JCPOA, which would involve a reduction in the number of centrifuges and the total stockpile of enriched uranium, in return for the lifting of sanctions that they claim are related to Iran’s nuclear activities.

However, many of the sanctions imposed on Iran by Trump’s “maximum pressure” campaign would remain. Washington states these sanctions are related to missile technology, terrorism, attacks on oil installations in the Persian Gulf, Iranian support for the Houthis in Yemen, and human rights violations.

Iran sees all of these sanctions as directly linked to the nuclear deal and Trump’s attempts to force Tehran to change the agreement.

An Iranian source close to the government said that these non-nuclear related sanctions are a direct violation of the JCPOA because they impede normalisation of Iranian trade and business.

The Iranians want all post-JCPOA sanctions removed, along with those agreed within the original pact.

The talks in Vienna have got off to a rocky start.

MEE understands that splits have emerged in the international team involved in face-to-face talks with the Iranian delegation.

When representatives of a European country lambasted Iran, accusing it of intransigence, the head of the Chinese delegation highlighted western hypocrisy over nuclear proliferation, pointing to the AUKUS defence deal signed between the US, the UK and Australia in September.

The representative of the EU country then backed down when the Iranians told them not to threaten them. He then noted his opening remarks had been misinterpreted, a source familiar with the US position told MEE.

A spokesman for the EU at the talks did not respond to a request for comment.

The European side then requested an adjournment and the Iranian delegation dissented, claiming they would all have to return to Tehran. The talks then continued.

Since June, US officials have repeatedly warned that the window of opportunity for an agreement was closing. Bagheri dismissed this, making it clear that Iran felt no pressure.

“The issue of the negotiations now is not related to Iran. It is related to the United States,” he said, arguing that US violation of the JCPOA, UN Security Council Resolution 2231 and international law put the onus on Washington.

“Therefore, now the ball is in the court of the Americans. The Americans must remove the sanctions,” he added.

Rejecting claims that Iran had agreed to use a framework deal hammered out by the outgoing reformist-led Iranian administration in June as the basis for resumed talks, Bagheri said he was not aware of any interim deal that had been tabled by the Americans.

The chief negotiator added the draft drawn up after the previous six sessions, which is said to have contained such elements, was “full of brackets” and not an agreement.

He made clear Iran was not prepared to talk to the US about Iran’s regional involvement. He stated he was in “constant touch” with Iran’s neighbours and had himself gone to the UAE and Kuwait before arriving in Vienna. MEE learned the talks in the UAE were very successful.

Bagheri told MEE it was “crystal clear” Iran would not negotiate on its missile force.

Bagheri, a noted former critic of the JCPOA who once called it “a sick child”, did say that he was prepared to negotiate the reinstatement of the agreement in good faith.

“I truly believe that this is a good opportunity for someone who is very familiar with various angles of the deal to defend the right and restore the right of the Iranian nation,” he added.

He stated there were two issues with the JCPOA: the letter of the law and the behaviour of those parties who had signed up to it. Neither the US, before it left the deal, nor the Europeans who remained, have properly lifted sanctions or traded with Iran.

“We also believe that the implementation of the JCPOA has not been precisely followed during the past several years,” the Iranian negotiator continued.

“The Americans, when they were in the JCPOA and had not yet withdrawn even at that time, they were not implementing the JCPOA comprehensively. So is the case with the Europeans that did not withdraw from the JCPOA, but in practice they failed to fully comply with the deal,” he added.

Iranian officials in Vienna say a major problem with the deal their previous administration signed was the lack of financial verification.

An Iranian source said that while former US President Barack Obama had agreed to the deal, the US Treasury threatened financial institutions and other business entities not to cooperate with Iran.

Bagheri’s 40-person-strong delegation includes two other deputy foreign ministers and a former governor of the Iranian central bank. This team is designed to “verify” whether any commitment to lift sanctions could be independently guaranteed by Iran.

In the run up to the talks in Vienna, Iran’s nuclear facilities have been repeatedly hit by attacks or acts of sabotage, which Tehran has accused Israel and the US of launching.

Iran’s main nuclear facilities at Natanz were hit in April for the second time in a year, and in June an explosion occurred at a site where uranium enrichment centrifuges were being manufactured.

Former government spokesman Ali Rabiei noted at the time the attack on Karaj was largely unsuccessful and claimed the damage to equipment was “insignificant”, but satellite images showed a section of the roof had been blown off, with signs of a fire.

Since then, Iran has refused to allow the International Atomic Energy Agency (IAEA) inspectors back into Karaj to reinstall cameras damaged in the explosion, claiming that footage obtained was used to prepare the attack, a claim vigorously denied by the IAEA.

These attacks have allowed Iran to “build back better”, in the words of US officials who complained to Israel that while tactically satisfying, the operations had only allowed Iran’s capacity to enrich uranium to grow.

The IAEA said in its latest report that Iran had installed 170 IR-6 centrifuges at its Fordow uranium enrichment facility, and The Wall Street Journal noted that the production line at Faraj was back in operation.