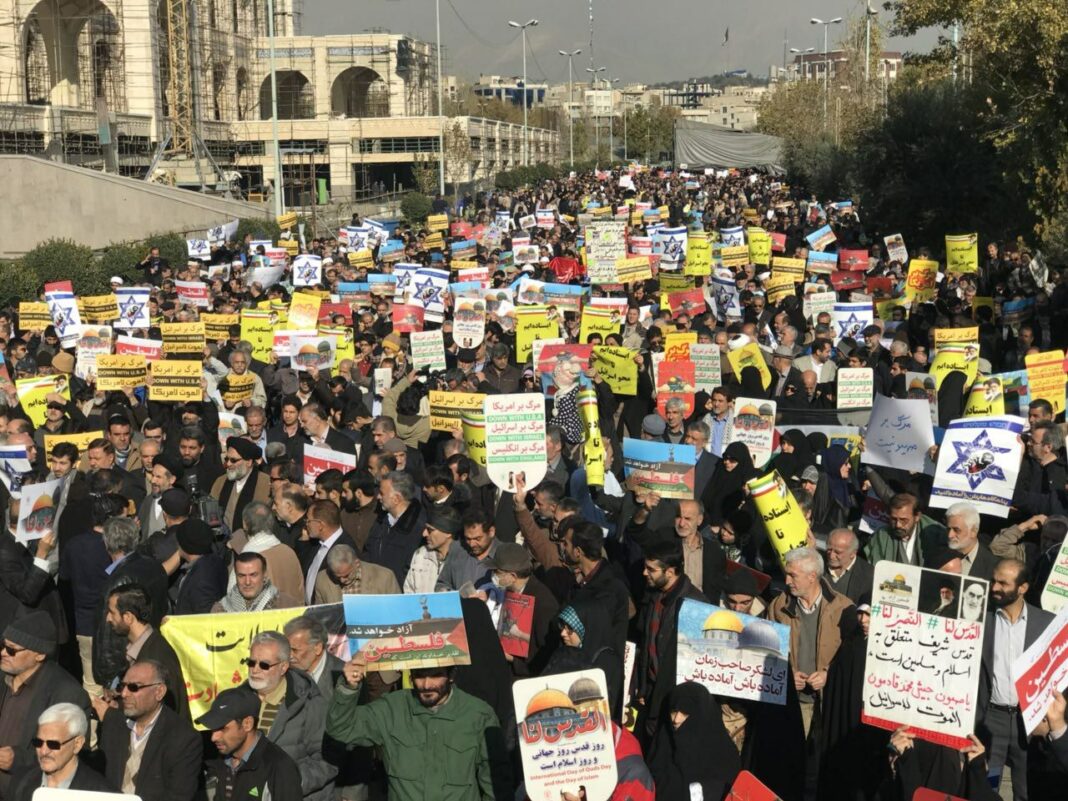 Along with many people across the world, millions of Iranians have taken to the streets in different cities to protest against US president’s decision to recognize Jerusalem al-Quds as the capital of the Israeli regime.

Iranians in Tehran, Khorasan, Zanjan, Alborz, Sistan and Baluchestan, Bushehr, and Kohgiluyeh and Boyer-Ahmad Provinces took to streets after the Friday prayers chanting slogans “Down with America” and “Down with Israel” to show solidarity with the oppressed nation of Palestine.

The angry protesters set fire on the US and Israeli regime’s flags.

Meanwhile, in several countries across the world demonstrators staged rallies to condemn Donald Trump’s decision to relocate US embassy from Tel Aviv to Jerusalem al-Quds.

In Kuala Lumpur, thousands of protesters led by Sports Minister Khairy Jamaluddin marched from a nearby mosque after Friday prayers to the US embassy, halting traffic as they chanted “Long live Islam” and “Destroy Zionists.” Many carried banners, some of which said “Free Palestine” and “Jerusalem is the capital of Palestine.”

In Indonesia, the world’s most populous Muslim nation, protesters shouted “Go to hell Israel!” and called on Trump to stop “blind support” for the Jewish state. Neither Malaysia nor Indonesia has diplomatic ties with Israeli regime and both are strong supporters of Palestinians.

The protesters marched from mosques to the heavily guarded US Embassy in Jakarta, waving Palestinian and Indonesian flags. They burned tires near the embassy and photos of Trump and US and Israeli flags in a similar rally in the cities of Banda Aceh and Makassar. Another protest was held in Surabaya, Indonesia’s second largest city.

Hundreds of Muslim Kashmiris also marched at several places in the main city of Srinagar and other parts of Indian-controlled Kashmir, chanting slogans “Death to America” and “Death to Israel.” They burned US and Israeli flags, while authorities imposed a curfew in old parts of Srinagar and disallowed Friday prayers at the city’s main mosque for fear protests could morph into violent anti-India rallies.

Meanwhile, students in the American University of Beirut showed their opposition to Trump’s decision by setting fire to Israeli regimes flag.

In the Afghan capital of Kabul, thousands of Muslims staged an unprecedented protest to tell to the world that Palestine is not alone.

In Turkey, people staged protests in 81 provinces of the country after the Friday prayers. In capital Ankara demonstrators gathered in Haci Bayram mosque to chant anti-US and ant-Israeli slogans.

Reports say security is tightened around the embassies of the United States and the Israeli regime in the capital city.