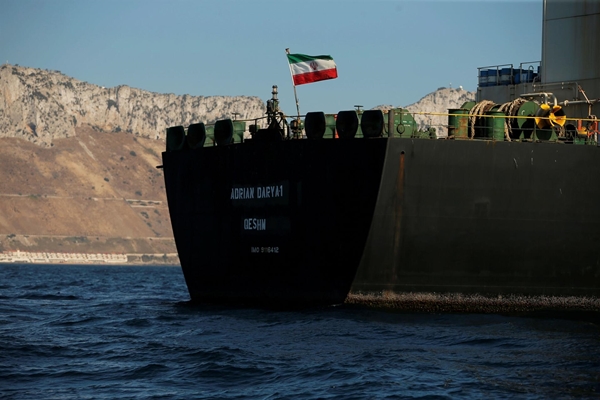 Iranian supertanker Adrian Darya 1 (formerly Grace 1) is heading for the Turkish port city of Mersin according to its AIS destination.

The Iranian tanker, which was recently released from detention in Gibraltar, was earlier supposed to call at a port in Greece.

On July 4, British Royal Marines boarded the VLCC Adrian Darya 1 in the Strait of Gibraltar and seized her on suspicion of transferring oil to Syria in violation of EU sanctions. Iran categorically rejected the charge, saying the tanker was not bound for Syria.

Iran, however, said it cannot disclose the final destination of the tanker due to the US sanctions.

The vessel was taken to Gibraltar and held until last Friday, when a court ordered her release. She got under way once more on Sunday, and over the course of the week she has moved slowly eastwards through the Mediterranean, broadcasting her destination as the port of Kalamata, Greece.

Kalamata is a small regional port, and it lacks the water depth needed to berth a laden VLCC. Greek officials have said that that they never received a request from the ship to call at the port.

“The ship is not heading towards Greece. We have not received a request for it to dock in a Greek port,” Greek Prime Minister Kyrikos Mitsotakis told France 24 TV in an interview Thursday.

The port of Mersin, Turkey also lacks the water depth to accommodate a vessel of Adrian Darya’s draft within the harbor.

The US State Department has repeatedly warned all members of the maritime community not to assist the vessel as part of its “maximum pressure” campaign, aimed at zeroing out Iran’s oil exports.

“All parties in the shipping sector should conduct appropriate due diligence to ensure that they are not doing business with nor facilitating business for, directly or indirectly, sanctioned parties or with sanctioned cargo,” an unnamed official told Reuters Thursday.