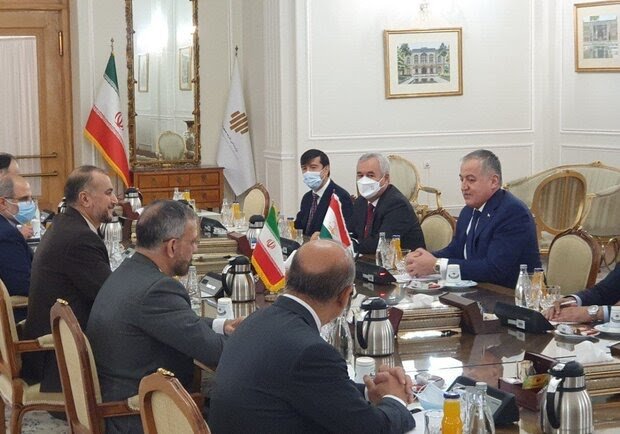 Iranian Foreign Minister Hossein Amirabdollahian and his Tajik counterpart Sirojiddin Muhriddin have discussed the latest developments in the relations between the two countries, especially in the fields of economy, political relations and cultural cooperation.

The top Tajik diplomat is in Iran to participate in the second meeting of Afghanistan’s neighbors.

During the meeting, Amirabdollahian thanked Tajikistan for hosting the Shanghai Cooperation Organization summit with the presence of a high-level delegation of the Islamic Republic of Iran chaired by President Ebrahim Raeisi, and the important agreements reached between the two presidents.

Amirabdollahian expounded on the Iran’s approach towards relations with neighboring countries calling it one of the most important foreign relations priorities of Tehran.

He described the deep cultural and linguistic commonalities with Tajikistan as an important capacity for bilateral cooperation.

The top Iranian diplomat also referred to the meeting of the foreign ministers of Afghanistan’s neighbors in Tehran on Wednesday, emphasizing the Islamic Republic of Iran’s view on the formation of an inclusive government with the participation of all ethnic groups in Afghanistan.

He expressed hope that this meeting can take effective steps so that the will of the people of Afghanistan will be realized, and contribute to the stability, peace and development of this country.

Tajik Foreign Minister Sirojiddin Muhriddin also thanked Iran for the invitation to take part in the meeting of Afghanistan’s neighbors and expressed satisfaction with the presence of the Iranian president and his accompanying high-level delegation at the SCO summit in Tajikistan.

He stressed the need to implement the agreements reached between the two presidents in Tajikistan.

The Tajik foreign minister said the volume of trade between the two countries is not commensurate with their existing capacities and expressed hope that bilateral trade would increase to an appropriate level.