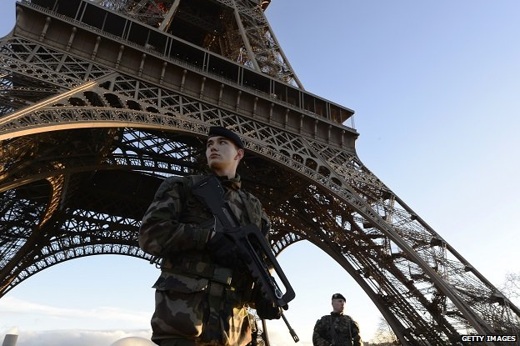 Two Iranian pundits familiar with Western culture and lifestyle react to Paris terror attacks and the wave of Islamophobia that has followed them.

Last week’s bloody terrorist attacks in France which claimed 17 innocent lives stunned the world. World leaders were swift to condemn the acts of terror targeting innocent people. In Iran too officials from the president on down denounced the attacks. On January 11, Mardom-e Emrooz daily published an interview with Seyyed Hossein Nasr, a prominent Islamic researcher and a George Washington University professor, on Islam and whether it promotes violence as some in the West allege. The daily also featured an opinion piece by Ebrahim Yazdi, a political activist and former foreign minister of the interim government that came to power immediately after the victory of the Islamic Revolution in 1979. Here is a partial translation of the two items which reflect the viewpoints of two individuals who are familiar with the Western culture and lifestyle firsthand:

In traditional Islam, Muhammad is identified as the prophet of compassion, but recent years have seen some Muslims adopt a radical, violent approach to dealing with the West and modernism. What do you think should be done to burnish the image of real Islam?

Attention should be paid to words and deeds. When it comes to words, we need to speak in a way that creates harmony among followers of different faiths. That is what I have been doing for five decades now.

When it comes to deeds though, the behavior of Islamic leaders comes to the fore. They have a big responsibility to shoulder on that front. There are only a small minority who display violent behavior.

Some Western texts allege that Islam is potentially violent. What’s your take on such allegations?

I believe such allegations are baseless. If you take a look at the history of Christianity, you’d see that there have been more cases of violence and massacre than in the history of Islam.

For instance, in India which is called the land of peace, there have been many tribal and factional wars. Violence has nothing to do with religion. It is part of human nature. Medieval Europe hid behind religion to commit all manner of crimes. After the secularization of the continent, economy and politics replaced faith as new pretexts to wage war.

Under the Blasphemy Act approved by the Parliament of England, it is an offense to show disrespect for religious beliefs. In other words, one cannot use freedom of speech and pen to treat religious sanctities with contempt.

When Salman Rushdie had his book – The Satanic Verses, which included disparaging remarks about the Prophet Muhammad – published which sparked widespread outrage among Muslims throughout the world, the Muslim Council of Britain drew on the very same law to press charges against Salman Rushdie.

However, the court refused to address their complaint, citing the fact that the act only applies to Judaism and Christianity. Later, a group of Muslims called on the parliament to amend the act, so that it can apply to Islam too.

I am not aware how the appeal was addressed, but what is more important than how the parliament responded to the appeal is that in England there is a law that does not allow disrespect for the religious beliefs of Jews and Christians in the name of freedom of speech and pen.

Likewise, in France, there are some rules that restrict freedom of speech and pen. For example, one such law considers any display of doubt over the number of Jews victimized in the Holocaust as an offense which can result in prosecution.

As for the Holocaust, there are two points worth considering. The first one is that in Nazi Germany, spite and resentment toward Jews were so deep that Jewish men, women and children were detained and sent to horrific concentration camps simply because they were Jewish. [The second point] is that at such camps, lots of people lost their lives. How many were actually murdered is open to dispute.

The Zionist government has put the number of victims at 6 million. Regardless of the number, such an incident which took place not in Europe of the Medieval Ages but at the cradle of a  European civilization just in the middle of the 20th century is by itself shameful and has shocked the conscience of humanity.

According to Verse 32 of Maidah Surah in the Koran, if an innocent person whether a monotheist, non-monotheist, white or of a different color, is killed unfairly, it is as if the whole mankind has been murdered.

Nonetheless the passage of a law in France which regards doubting the number of Holocaust victims as an actionable offense seems to be absolutely stunning and controversial.

A number of European researchers have presented evidence which suggests that the number in question has been exaggerated.

It’s worth noting that in Paris, a leading figure like Roger Garaudy – a French philosopher – was tried on charges of dismissing the figure as incorrect in his book, was convicted and his book was not granted the go-ahead to be published. […]

Such conviction was not deemed a violation of freedom of speech and pen and failed to draw objections from the French president and other European and US officials.

Following the collapse of the former Soviet Union which brought down the curtain on Marxism – known as the ideology of revolution – and marked the end of the Cold War, ties among countries of the Northern Hemisphere (developed nations) and the world of Islam became the centerpiece of international relations.

Any review of such relations should distinguish between Islam, as an idea, and the status of Muslims, as a human community. Islam is spreading irrespective of how Muslims behave. Some researchers hold that Islam is once again playing a creative role in human society.

Islam’s innate magnetism and its spontaneous growth have triggered reactions from Christian and Jewish neocons in the West and led to the emergence of “Islamophobia”. What some Takfiri groups have done in the name of Islam has fueled such a phobia too.

Whether or not the hidden hands behind [tragic] incidents, such as Paris terror attacks, ISIL [crimes] in Iraq, Pakistan school massacre or deplorable acts at the hands of Boko Haram in Nigeria, are linked with certain Western circles – who took and still take the simplicity and emotionality of Muslim youth hostage – should be meticulously studied.

As I said above, ties between Northern Hemisphere countries and the Islamic world are one of the pillars of international relations. The strategic interests of Muslims lie in the containment of anti-Islamic movements. This is achievable on two fronts.

On the one hand, Muslims around the world should overlook tribal and religious attachments, stand united to take on extremist, violent Salafi groups in a coordinated fashion, and do anything humanly possible to subdue them. Muslims should not get carried away by sensations and should not show uncalculated, emotional reactions to anti-Islamic developments.

One of the main challenges the world of Islam is facing is how to bring these groups under control and put them back on the right path. To make it a reality, military tools alone are not enough.

On the other hand, Islamic institutes, groups and figures, especially those based in Western countries, can tap into available democratic mechanisms and make laws to prevent provocative and confrontational acts.

The Muslim prophet has been quoted as saying that if you want to remain immune to a certain tribe, try to learn their language. Clearly the Prophet does not mean the language people use to speak; rather, understanding the mentality, or the “psyche”, of nations is important.

That France has passed laws which incriminate those who doubt the number of Holocaust victims, or the Blasphemy Act which has been enacted in Britain shows that the Jews and Christians hold sway in these countries’ legislatures.

Today Muslims who account for significant demographic groups in Europe and America can exploit their potential to ratify laws banning disrespect for Islam and the religious beliefs of Muslims.

It has proved a success in the US. The Muslim Public Affairs Council (MPAC) which acts as the executive arm of US Muslims in Washington D.C., including on Capitol Hill, has successfully tested this method. […]

We need to use this well-tested method in other places as well. Once Muslims were depicted as camel-riding Arabs wielding swords in a desert, but today they are living next door to Christian and Jewish citizens in Europe and the US.

Universal peace and serenity hinges on knowing each other and showing respect for the religious beliefs of other people. Christians used to curse the Jews and Turks – who represented Muslims – in their Sunday mass. The prayer was removed from their religious rituals by order of the Pope a few years ago.

For their part, Islamic groups, institutes and figures can sit down for talks with European officials and convince them to pass appropriate laws which forbid insults to religious beliefs of not only Muslims but those of other religions as well.

They can also put forward legal mechanisms for lodging complaints with courts against [the release of] contemptuous materials. The Islamic governments too can use diplomatic tools to help it come true.