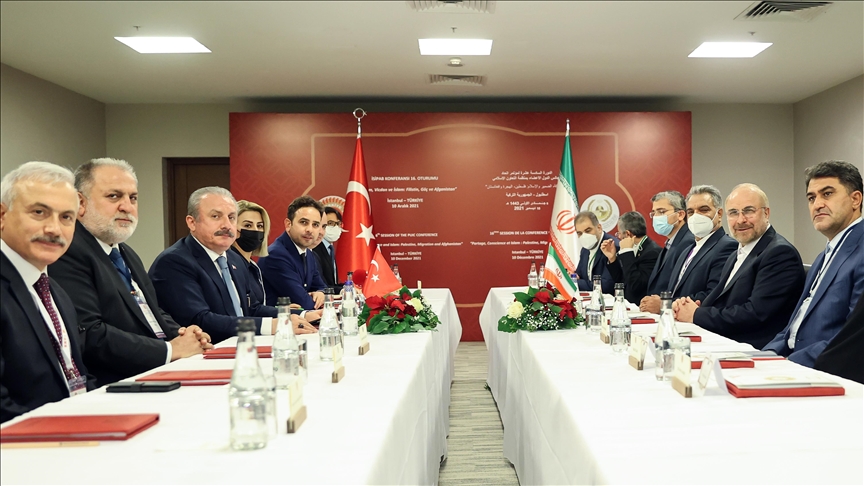 Iran’s Parliament Speaker Mohammad Baqer Qalibaf has held talks with his Turkish counterpart Mustafa Şentop in Istanbul where he is attending the Inter-Parliamentary Union of the Organization of Islamic Cooperation (OIC) on Palestine and the issue of Afghans’ migration to Islamic countries.

The Iranian parliament speaker said Iran and Turkey can have a positive impact at the regional and international levels through close cooperation, adding, “I saw the result of this cooperation in the meeting of metropolitan mayors when I was the mayor of Tehran, and now we are ready to define joint cooperation”. Qalibaf said Iran’s priority is to develop cooperation with neighboring and Islamic countries. He also expressed hope that in the near future, the strategic agreement between Iran and Turkey will be finalized and a roadmap for developing bilateral relations will be developed.
The Iranian parliament speaker said close bilateral cooperation between Tehran and Ankara will play an effective role in regional and international developments.
He also said the US enmity toward Iran and its recent pressures on Turkey show Washington understands the power f the two countries and their influence in the region.
Şentop also said it is necessary to strengthen the position of the Inter-Parliamentary Union of the Organization of Islamic Cooperation once again through coordinated actions and close cooperation on problems of Islamic countries.
The Turkish parliament speaker emphasized the formation of a committee for the rights of Muslims, saying the issue of Palestine has always been on Turkey’s agenda.
On bilateral ties, Şentop said “We are also determined to develop ties with Iran within the framework of parliamentary relations”.