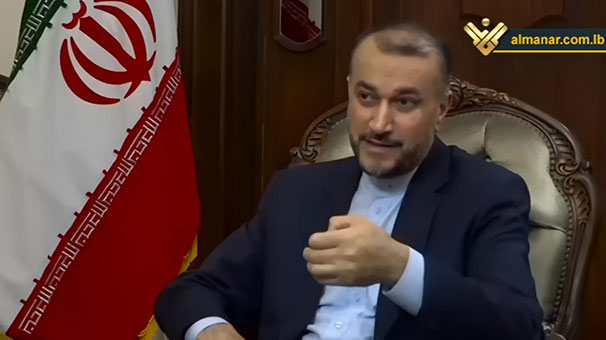 In the exclusive interview with Lebanon’s al-Manar television channel, Amir Abdollahian also said the US thinks its presence in the region no longer serves its interests.

He noted that the US might maintain a military presence in small pockets in this part of the world,  but they will not keep a formidable force here. Elsewhere, Amir Abdollahian spoke of Iran’s assistance in the war on terror. He praised Iranian General Qassem Soleimani as a national and international hero of fighting terrorism.

Amir Abdollahian also touched on the developments with regard to the Republic of Azerbaijan. He said Iran’s message to the country was one of peace and friendship and that Iran’s message was “terrorists must not be allowed to take a foothold near its borders”.

The Iranian foreign minister added that Iran has also conveyed a message of peace and security wherever it has been present.

He noted that Iran’s military exercises also had a similar message and they were meant prevent the presence of Zionists and Takfiri terrorists in the region.

Amir Abdollahian said the Islamic Republic’s policy is to maintain neighborly relations. The foreign minister also said, “We told Azerbaijan that the presence of the Zionist regime in the country will not be conducive to regional peace”.

Meanwhile, Amir Abdollahian stressed that the Zionist regime has received the resistance’s message. He added that the Israeli regime is unable to further expand and that “they are incarcerated in occupied Palestine”.

On Afghanistan, the Iranian foreign minister said Tehran is in contact with all Afghan factions and supports an inclusive government there that would be made up of all Afghan groups.

The Iranian foreign minister also said Iran supports Lebanon’s independence and sovereignty and is ready to help the country.