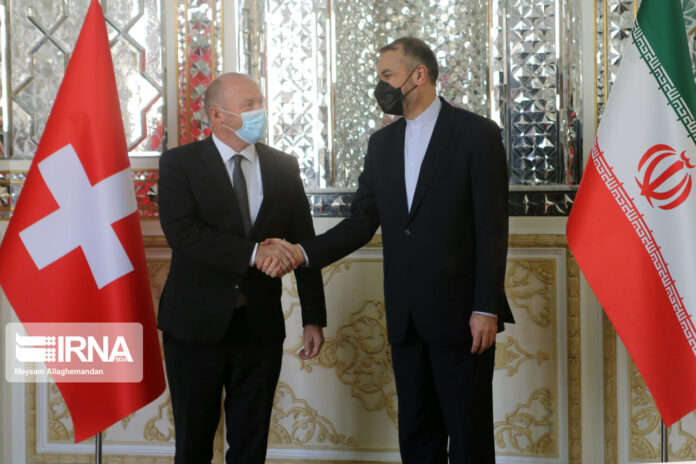 The Speaker of the Swiss National Assembly Andreas Aebi, who is leading a delegation visiting the Islamic Republic of Iran, met this morning at the Ministry of Foreign Affairs with Iranian Foreign Minister Hossein Amirabdollahian, to discuss bilateral relations and exchange views over regional and international issues.

Amirabdollahian, in the meeting, referred to the good relations between the Islamic Republic of Iran and Switzerland, describing as important parliamentary diplomacy between the legislative bodies of the two countries and the role of parliaments in the comprehensive development of cooperation.

Amirabdollahian also called the Swiss National Assembly speaker’s trip an important step for the development of parliamentary cooperation between the two countries.

The foreign minister further explained the vision of the new government of the Islamic Republic of Iran regarding balanced relations with foreign countries and said the development of ties with Switzerland in various areas is important.

Amirabdollahian also spoke of the important capacities of bilateral relations in the political, economic and cultural fields between Iran and Switzerland, saying the cooperation between their small and mid-size enterprises could be enhanced. He stressed the need to hold a joint commission for cooperation between the two countries.

Referring to the beginning of the cold season and the escalation of difficult conditions for the people of Afghanistan, Amirabdolhian emphasized the need for collective cooperation of all countries to handle the situation there and especially the sending of humanitarian aid to the country. He added that the Islamic Republic of Iran has already been active in this field.
The Iranian foreign minister explained the 13th government’s view on the resumption of the Vienna talks, saying Iran will finalize its conclusions in this regard in the near future. He said in future talks, Iran’s actions will be commensurate with the level of actions of the other parties.

The speaker of the Swiss National Assembly also said he was pleased to visit the Islamic Republic of Iran as a country with a pivotal role in the region. Aebi described his meetings with the Iranian parliament speaker and other parliamentary officials as constructive. He went on to refer to the role of the Swiss Embassy in Tehran as a guardian of the interests of some countries and the importance of strengthening this role.

He also praised the role of the Islamic Republic of Iran in taking in millions of Afghan refugees over the past decades and Tehran’s current approach to providing services to the Afghan people.

Regarding the nuclear talks, the speaker of the Swiss National Assembly stressed his country’s interest in playing a role in bringing the parties’ views closer together.

The latest developments in the talks between Iran and Saudi Arabia, as well as the developments in Yemen, were among the other topics discussed by the Iranian foreign minister and the speaker of the Swiss National Assembly.