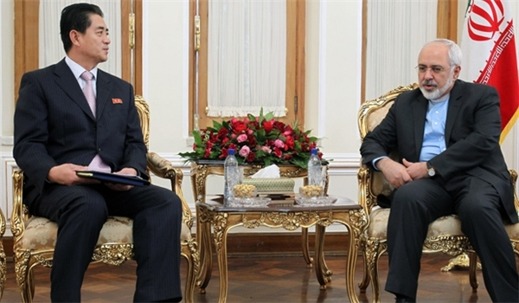 As for the two Koreas, Tehran’s policy underscores the need for dialog and avoiding the use of force and military action, said Zarif.

“We believe that the Korean Peninsula issues should be settled peacefully,” Zarif said in a meeting with North Korea’s new Ambassador to Tehran Kang Sam Hyon on Monday.

He described foreign meddling in issues related to the two Koreas as harmful, and said, “Our approach lays emphasis on talks and avoiding the use of force and military action.”

Zarif also referred to his North Korean counterpart’s visit to Tehran, and said, “Bilateral issues are on the agenda and we will follow the existing ground to expand relations.”

Sam Hyon, for his part, conveyed the greetings of the North Korean foreign minister to Zarif, and said, “North Korea is willing to develop economic relations with Iran along with the political ties.”

Earlier this month, Kim Jong-Un proposed the “highest-level” talks with South Korea, opening the way to a historic summit.

The sudden move, made during Kim’s traditional New Year message, would clear the path for the first inter-Korean leaders’ meeting since a 2007 summit in Pyongyang.

“Depending on the mood and circumstances to be created, we have no reason not to hold the highest-level talks,” Kim said in the televised speech, calling for a thaw in icy relations between the two Koreas, which remain technically at war.

Seoul welcomed the overture as “meaningful”.