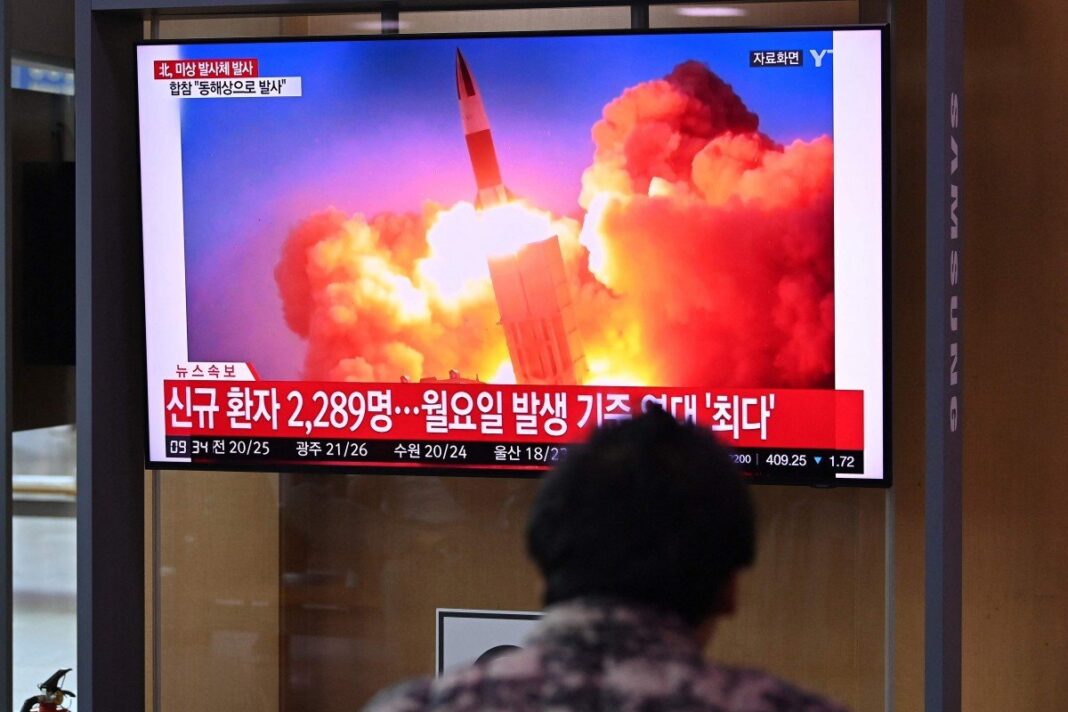 South Korea says its Northern neighbor fired an “unidentified projectile” into the East Sea on Tuesday. It comes hours after the United States announced its readiness to meet with the Pyongyang leaders without preconditions.

According to Seoul-based Yonhap News Agency, South Korea’s Joint Chiefs of Staff gave no indication of what type of missile had been fired. However, the senior brass typically only issue alerts if they believe the test was of a ballistic missile.

The DPRK has used the Sea of Japan to test a number of new short-range ballistic missiles in recent years, but the socialist country also recently unveiled a new missile fired from a train car, intended to enhance its survivability from a strike by another nation. They have also recently tested a long-range cruise missile.

According to Japan’s Kyodo News, the Japanese Defense Ministry reported the DPRK had fired a single missile and there was a low possibility it had landed in Japan’s exclusive economic zone.

The US military later announced there is no immediate threat from the North Korean missile launch.

“We are aware of the missile launch and are consulting closely with our allies and partners. While we have assessed that this event does not pose an immediate threat to U.S. personnel or territory, or to our allies, the missile launch highlights the destabilizing impact of the DPRK’s illicit weapons program,” the United States Indo-Pacific Command (USINDOPACOM) said in a statement.

“The U.S. commitment to the defense of the Republic of Korea and Japan remains ironclad,” it added.

The test launch came just moments before the DPRK’s ambassador to the United Nations was set to address the UN General Assembly underway in New York.

Taking the podium in New York, Ambassador Kim Sung said no one can deny the DPRK’s right to self defense and to test weapons, given the hostile policies of other nations.

“The possible outbreak of a new war on the Korean Peninsula is contained not because of the U.S.’s mercy on the DPRK,” Kim stated, adding, “It is because our state is a growing reliable deterrent that can control the hostile forces in the attempts of a military invasion.”

However, he indicated that if the US gives up its “hostile policy, we are also prepared to respond willingly at any time”.

Kim added that if the US is serious about ending the Korean War, it should give up its hostile policy and stop its military exercises aimed at the DPRK, as well as the deployment of strategic weapons.

“But it is our judgment that there is no prospect at the present stage for the US to really withdraw its hostile policy,” Kim said.

Earlier on Monday, a spokesperson for the US Department of State noted Washington is “prepared to meet with the DPRK without preconditions and we certainly hope that the DPRK will respond positively to our outreach”.

The test comes a day after Kim Yo Jong, Deputy Department Director of the Publicity and Information Department of the Workers’ Party of Korea, also said the country remains open to an inter-Korean summit with leaders from the Republic of Korea, as the South is officially known, but only if mutual “respect” and “impartiality” are guaranteed and the South drops its double-standards.

Last week, South Korean President Moon Jae-in called for a joint declaration on ending the state of war with the DPRK. The two nations discussed such an endeavor in 2018 amid a historic rapprochement and laid the groundwork for it in two declarations in April and September of that year. However, as peace talks between North Korean leader Kim Jong Un and then-US President Donald Trump stalled, so did inter-Korean talks.

The largest stumbling blocks have been strangling economic sanctions against the DPRK intended to force it to give up its ballistic missile and nuclear weapons programs, and the continued presence of 28,000 US troops in South Korea. Seoul has continued to engage in military drills with the US, which the North has announced indicate the South’s lack of seriousness about peace.

A state of war has existed since 1950 between the DPRK on one side and South Korea and the United States on the other. When the Japanese Empire surrendered to the Allies in 1945, ending World War II, the Soviet Union had only liberated half of Korea, which was a Japanese colony. Consequently, a socialist government prevailed in the north, and a capitalist government formed in the south, which passed to American control. The divide erupted in a civil war in 1949 that the North threatened to win, but a US-led military intervention in 1950 pushed the communist Korean People’s Army back almost to the Chinese border.

A Chinese all-volunteer force under North Korean command helped turn the tide of the war, and by the time a ceasefire was signed in 1953, the front lines had been pushed almost to where they were when the war began. However, the brutal war, which included massacres on both sides and US strategic bombing that leveled North Korean cities, left more than 2 million Koreans dead. A permanent peace treaty has never been signed, and Korea remains divided by a heavily defended demilitarized zone.