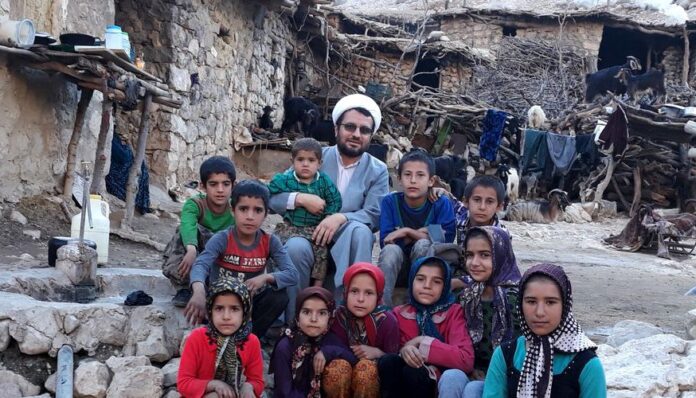 Esmail Azarinejad is now a well-known cleric. He is a cultural activist and spends most of his time narrating stories for children, taking care of affairs pertaining to schools in remote areas and reforming some of social and economic affairs in deprived areas.

So far, he has had interviews with the British daily The Guardian as well as several other media outlets from countries in the region and a number of domestic news agencies. He is regarded as a media outlet himself. He posts his viewpoints and his activities on social media such as Twitter and Instagram. He also puts posts about shortcomings. Many political, social and cultural figures follow him in the cyberspace and react to his postings.

“Unfortunately, our city and province are in a deprived region. When I was a child, we were even worse off. My father and mother were illiterate, but my aunt’s husband, who was a teacher, encouraged me to read books,” he says.

Years later, Azarinejad went to Qom and studied at the city’s Islamic Theology School. Simultaneously, he received his Bachelor’s degree in sociology and Master’s degree in mysticism. Although he was offered a job involving scientific research, he preferred to live beside deprived people in Kohgiluyeh and Boyer-Ahmad province be with them to help solve their cultural problems.

When Azarinejad returned to the town where he had grown up, he became the Imam of one of the local mosques and began teaching at the small theology school in the town. However, his more important objective was to promote book-reading among people, especially children and youth. So, he launched a book-reading and story-reading circle that met after congregational prayers at the mosque. After some time, he began to lend books to those interested. He promoted the book-reading practice and spread it to remote villages.

He would fill the trunk of his car with books and go to deprived areas, most of the time accompanied by his wife and two children. At the beginning, he made friends with children by playing happy games with them. Then he began to teach them cultural activities and how to read books.

“In the rural areas of Kohgiluyeh, children, boys and girls alike, are regarded as workforce. Since the very early childhood, they must pick acorns and go shepherding. Sufferings and day-to-day affairs takes childhood from them, and fathers and mothers cannot spend time for their children. So, my first attempt was to approach them through fun and games to encourage them to tell stories and read books,” he says.

“I began to approach them through story-telling in order to be able to talk to children,” he says.

“Through concepts in the story, I encourage children to think. This is the way for intellectual development in order to transcend the appearance and reach the depth of materials; moreover, through this method, children get used to conversation from very early ages,” he says.

“Peace and security will not take place unless through consultation and dialogue. Tolerance to opposing views is a necessity for the future generation. Science makes progress with two things: wisdom and experience, and children grow with the same very experience,” he notes
He also works with benefactors to help renovate and refurbish schools.

His bigger goal is to help improve the economic situation of villages. For example, he has helped run small workshops to create jobs.

Azarinejad’s cultural activities has received widespread coverage in the court of public opinion, especially among the elite. So, he has been picked as one of 11 popular figures of the year.