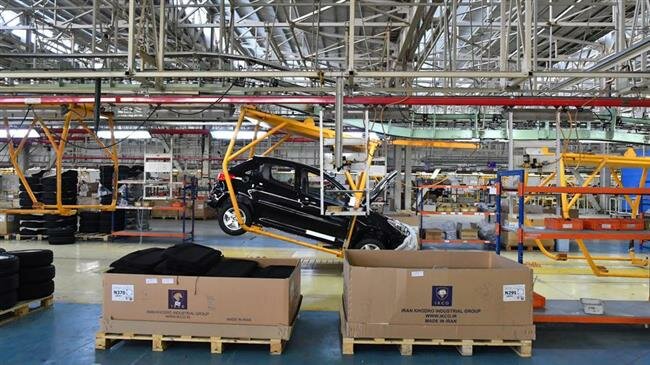 Iran has returned a car assembly line in Syria to production, which makes an affordable model named the Sham after the country’s denomination during the seventh century Umayyad period.

The joint venture to produce the Sham – a mid-range family saloon based on Iran Khodro’s Samand car – started before the outbreak of the war in Syria in 2011.

The war seriously damaged many car plants in Syria, putting a temporary damper on the two allies’ plans to bring their economies closer together.

Other than the Sham, Iran Khodro used to assemble Peugeot cars in Syria, while Saipa – the second largest Iranian car manufacturer – produced its own models.

“Although car factories in Syria suffered damage, we tried to return them to the production line after the war,” Iran’s Labor, Cooperatives and Social Affairs Minister Mohammad Shariatmadari said on Tuesday.

“Our efforts are to help the car industry continue (its life) in Syria. Currently, the production line of the Sham is back up and running,” he added.

Shariatmadari made the remarks after signing a memorandum of understanding with his Syria counterpart Rima al-Qadiri in Tehran.

Under the five-year agreement, Syria will be able to use Iranian experts in the country’s reconstruction and provided with technical and professional education help.

“Cooperation between Iran and Syria in the field of labor force and economy will maximize in the future,” Shariatmadari said, hailing the document as “valuable”.

It has given Damascus direct financial aid and help restoring its infrastructure despite sanctions which affect many Iranian businesses operating in Syria.

An Iranian supertanker currently being held off the coast of Gibraltar was seized by Britain’s Royal Marines last week on the pretext that it was shipping oil to Syria, which Tehran has denied.

Syria has enthusiastically encouraged business ties with Iran, helping set up a joint chamber of commerce and a joint bank to facilitate money transfers in the face of US sanctions on both countries.

Iranian companies have signed several major projects, including a mobile network license, phosphate mine and oil refinery announced in January 2017.

Since the war began, there have been more Iranian goods for sale and Iranian dates, saffron, raisins and cosmetic products are becoming a ubiquitous sight in Damascus shops.

Early this year, the two countries signed 11 agreements, including a “long-term strategic economic cooperation” deal, in a sign of changing winds in the Middle East which is shaping up to new realities.

Al-Qadiri on Tuesday thanked the Iranian government and nation for standing with Syria in its “resistance” against terrorists and their foreign supporters.

“We expect you will also be helping our nation in Syria’s reconstruction and development phase,” she said, speaking to reporters along with Shariatmadari.

President Bashar al-Assad has estimated that Syria’s reconstruction will cost between $250 billion and $400 billion. He has made it clear that the West won’t be part of it.