Iran will reveal its modern missile bases in due time 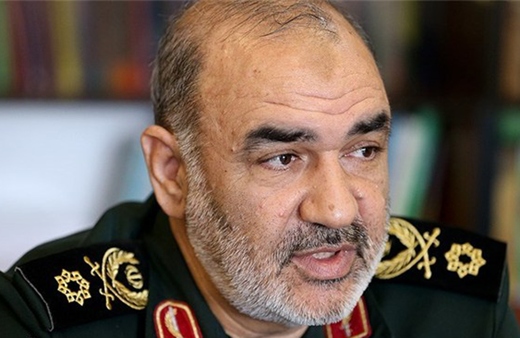 The IRGC’s second-in-command has said that Iran will show its modern missile bases to the world at an appropriate time.

A senior commander of the Islamic Revolution Guard Corps (IRGC) has said that the IRGC does not allow anyone to impose their wills on Iran.

Brigadier General Hossein Salami, the second-in-command of the IRGC, made the comment in an IRIB nightly news bulletin on Monday and added that today the Islamic Republic of Iran is the country which helps developments unfold in the region.

The following is the translation of highlights of the top commander’s remarks in the TV program as selected and released by entekhab.ir on October 27:

– If our forces do not engage [the enemy] in Syria today, we may have to engage them in other places.

– Iran’s presence in Syria has increased both qualitatively and quantitatively since a few months ago when Iran assumed an advisory role and got involved in rebuilding the Syrian army.

– We have to be present in Syria in order to adapt our experiences with new realities on the ground. Today Syria serves as a war university for us. Iranian forces are skillfully winning the hearts [and minds] of people in Syria.

– We have started to rebuild the Syrian army at a good pace.

– The Syrian army has launched a massive ground operation backed by the Russian air force. Already, this operation has largely tipped the balance on the battlefield, and crucial reports on this operation will be released in coming days.

– The transformation of the [Syrian] army backed by the presence of young forces has tipped the balance in Aleppo.

– Building on their new interpretation, the Russians have got engaged in Syria. They see Syria as part of their geopolitical position [in the region] and they need Syria for striking a balance over Ukraine.

– The Russians do not want to see their borders come under attack by Takfiris – the proxy infantry of the United States – from either Pakistan or Afghanistan or from the Syria-Turkey-Caucasus side.

– The Russians believe that forces from Asia and Chechnya account for 20 percent of the Takfiri commanders.

– The victories the al-Hashd al-Shaabi [the Popular Mobilization Forces in Iraq] have secured in Iraq indicate that positive changes are happening in Iraq, and triumphs in Fallujah and Baiji are further proof of such changes.

– The missiles Iran has developed have a zero margin of error.

– The underground missile base Iran showed the world [a while ago] was the country’s oldest base; we will show our modern bases in due time.

– The Supreme Leader of the Islamic Revolution, who is leading faithful forces, can manage any war in the world.

– The IRGC does not read the resolutions, because no one is allowed to dictate anything to us. Today the Islamic Republic is the one who dictates the developments.