Iran won’t negotiate with US on matters other than nuclear issue: Leader 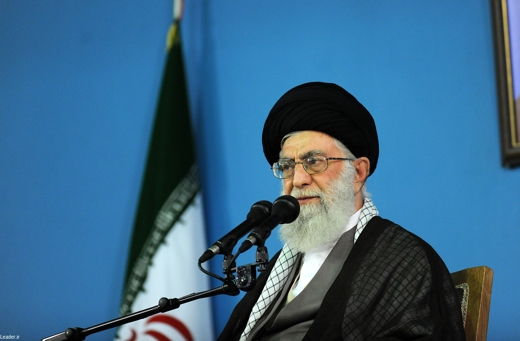 The Supreme Leader has said that US officials seek to hold negotiations with Iran because they want to influence the Islamic Republic and impose their demands on Iran.

The Supreme Leader of the Islamic Revolution says the Islamic Republic “did not and will not hold talks with US on issues other than nuclear negotiations.”

Addressing people from different walks of life on Wednesday, the Leader said, “We agreed to hold talks with the Americans only on the nuclear issue and for particular reasons, and thank God, our negotiators did a good job.”

The Leader noted that the United States does not conceal its animosity toward Iran, adding, “One [US official] smiles, while another draws up a bill against Iran.”

Ayatollah Khamenei emphasized that US officials seek to hold negotiations with Iran because they seek negotiations as a means of influencing the Islamic Republic and imposing their demands on Iran.

Referring to comments by the Tel Aviv regime after the conclusion of the Iran-P5+1 nuclear talks that Israel will have no more concerns about Iran for the coming 25 years as a result of the nuclear agreement, the Leader said, “First of all you will not [survive enough to] see the next 25 years, and God willing, no such thing as ‘the Zionist regime’ will exist in the next 25 years.”

“Secondly, during this period, the combatant, and epic, and jihadi spirit will never leave Zionists alone for a single moment.”

Noting that the late Imam Khomeini has described the United States as “the Great Satan,” the Leader said, “Some people insist on disguising this Great Satan as the savior angel. [However,] the Iranian nation expelled this Satan [from the country]; we must not allow that when we expelled it through the door, it could return and gain influence [again] through the window.”

Emphasizing the importance of having strong and resistance-based economy, advanced science, and a revolutionary spirit as three factors that strengthen the Iranian nation in the face of enemies, Ayatollah Khamenei, added that state officials should respect revolutionary youths, while advising “certain” speakers and writers not to verbally attack faithful and revolutionary youth by labeling them as extremist.

Referring to the importance of elections in Iran, the Leader took to task “certain people” who raise doubt about wholesomeness of elections, stressing that the Guardian Council is the “watching eye” of the Iranian nation and government in any elections.