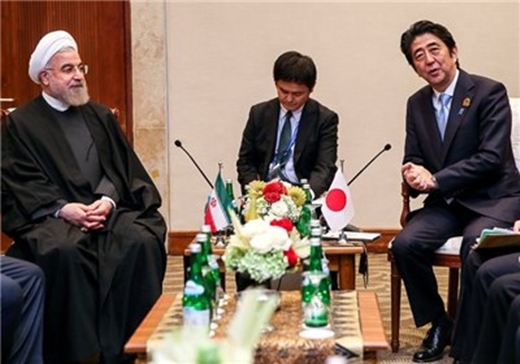 The Iranian president has said in a meeting with the Japanese premier that poverty and lack of development are the key roots of terrorism in the region.

Iranian President Hassan Rouhani expressed Tehran’s willingness to expand its relations with Tokyo in all fields, saying that Japan can seize the opportunities for economic cooperation with Iran.

“Tehran is keen on the development of cooperation with Tokyo in matters of interest, especially in scientific, technological, ecological, and economic areas,” Rouhani said in a Wednesday meeting with Japanese Prime Minister Shinzo Abe in Indonesia’s capital, Jakarta.

Rouhani further referred to the extensive presence of large companies from Europe and other countries in Iran, and said that Japan can also avail itself of the opportunities for economic cooperation with Iran.

The Iranian president also underscored the necessity for joint efforts against terrorism and extremism, saying that poverty and lack of development are the key roots of terrorism in the region.

“Through mutual cooperation, Iran and Japan can work together toward the advancement and development of the countries of the region and diminish the grounds for poverty through mutual economic cooperation,” he stated.

Abe, for his part, said that Tokyo-Tehran relations have improved significantly and that Japan welcomes the expansion of mutual cooperation.

He also expressed hope that Tehran can keep playing its “constructive” role in the region, urging that Iran and Japan should continue their talks on regional and international issues.

President Rouhani last met Abe in September on the sidelines of the United Nations General Assembly in New York.