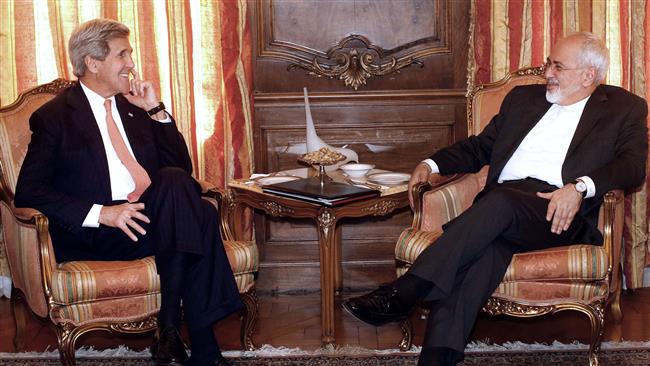 FM Zarif has said that any use of nuclear weapons would be a crime against humanity and violation of the UN Charter and international law.

US Secretary of State John Kerry and Iran’s Foreign Minister Mohammad Javad Zarif have met on the sidelines of a UN anti-nuclear weapons conference in New York.

The meeting was held on Monday at the residence of Iran’s ambassador to the United Nations where the two are taking part in the 2015 Review Conference of the Parties to the Treaty on the Non-Proliferation of Nuclear Weapons (NPT).

It was the first time that the top Iranian and US diplomats met since April 2, when Iran and P5+1 reached a mutual understanding over the Islamic Republic’s nuclear program.

Zarif and Kerry did not speak to reporters as the meeting started, but earlier in the day Kerry defended nuclear talks with Iran in his address to the summit.

The global community is “closer than ever” to a “good comprehensive” agreement with Iran, he said, adding, however, “the hard work is far from over and some key issues remain unresolved.”

“Now it’s important to remember that the NPT has always been at the heart of these negotiations. From day one, we have been focused on bringing Iran back into compliance with its obligations under the treaty. And if ultimately the talks are successful, it will once again prove the power of diplomacy over conflict and reinforce the rule of law,” the US diplomat said.

This comes as Iran has announced time and again that its nuclear activities are solely geared for peaceful purposes.

Iran and P5+1 ended their latest round of talks at the deputy and expert levels in Vienna, Austria, on April 24. The three-day talks were held with the goal of drafting the text of the Joint Comprehensive Plan of Action (JCPOA) based on the mutual understanding reached in Lausanne, Switzerland.

Addressing the conference on Monday, Zarif, who was speaking on behalf of the Non-Aligned Movement (NAM), said, “We firmly believe that any use or threat of use of nuclear weapons would be a crime against humanity and a violation of the principles of the Charter of the United Nations and international law, in particular, international humanitarian law.”

Zarif is set to deliver his speech as Iran’s foreign minister at the summit on Tuesday.