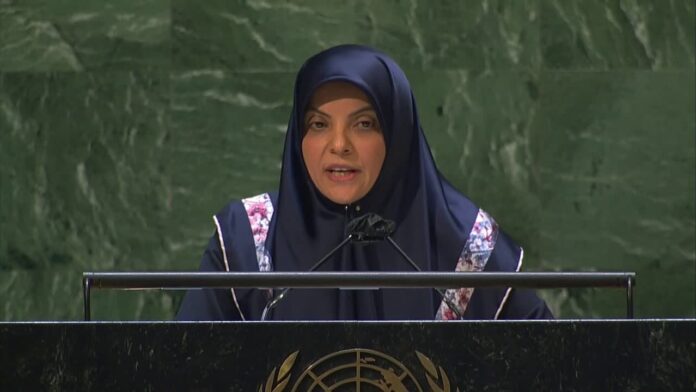 A top Iranian diplomat, addressing the Third Committee of the United Nations General Assembly, has called for the lifting of sanctions against Syria as well as ending to the siege of Yemen.

“It is a source of serious concern that in 2021, there are still over 6.8 million Syrians that remain internally displaced while 5.6 million Syrian refugees are also hosted in certain regional countries,” Ambassador and Deputy Permanent Representative of the Islamic Republic of Iran to the United Nations Zahra Ershadi said, addressing the Third Committee of the United Nations General Assembly.

“To that end, the full and immediate removal of unilateral sanctions as well as supporting the reconstruction of this country are essential,” she added.

The full text of Ershadi’s statement is as follows:

I would like to begin by acknowledging the activities of the United Nations High Commissioner for Refugees (UNHCR).

It is quite alarming that, according to the UNHCR report, the number of refugees and displaced persons is increasing.

It underscores that the efforts aimed at addressing the underlying causes of this trend must be redoubled.

It is also disappointing that despite the extraordinary generosity of particularly host countries, there is still a wide gap between the required funds and the needs such funding can address, which stresses the necessity for substantially increasing funds by donors.

Likewise, it is unfortunate that in the past two years, COVID-19 has also worsened the dire situation of refugees and the host countries.

To address this situation, there is a strong need to include the sharing of vaccines, especially with countries hosting large numbers of refugees, as has also been stressed by the High Commissioner during the 72nd session of the UNHCR Executive Committee on 8 October 2021.

It is a source of serious concern that in 2021, there are still over 6.8 million Syrians that remain internally displaced while 5.6 million Syrian refugees are also hosted in certain regional countries.

Recalling the conference on the return of refugees held in Damascus on 11 and 12 November 2020, we stress that every effort must be made to help them to return to their original places of residence.

To that end, the full and immediate removal of unilateral sanctions as well as supporting the reconstruction of this country are essential.

In this context, we warn about the political instrumentalization of the international protection of refugees by certain States.

Likewise, as reported by the UNHCR, Yemen remained the most acute humanitarian crisis globally with some 20.7 million people in need of humanitarian assistance, with displace persons to be four times more likely to be at risk of hunger.

To provide the conditions for an end to this tragedy and bring peaceful resolution to this crisis, the inhumane blockade imposed on this nation must be removed fully and immediately.

One of the major developments in 2021 in our region has been the sharp increase in the number of internally displaced persons and asylum-seekers following the withdrawal of foreign forces from Afghanistan and the subsequent developments.

As a result, as the UNHCR has reported, around 570,000 people became newly displaced within Afghanistan and an increasing number of individuals fled to neighboring countries.

For more than 40 years, the Islamic Republic of Iran has hosted one of the largest populations of refugees despite it being subjected to inhumane unilateral sanctions, particularly by the United States.

During all of these years, only five percent of the total funds needed to support refugees in Iran has been provided by the international community.

We have indeed generously shared our much-needed resources with refugees and supported them many times more than our fair share.

This fact has been acknowledged on numerous occasions time and again at the international level. In recent years, High Commissioner Grandi has affirmed in this very Committee that despite economic pressures, the Islamic Republic of Iran had continued to be an exemplary host country.”

Our experience tells us that when there is a flow of Afghan asylum seekers that might lead to Europe, Iran is urged to host them, and while some assistance is provided at the beginning, as soon as the dust settles, the host country is left alone almost completely.

Now that Iran’s economy has been and continues to be seriously affected as a result of the COVID-19 pandemic as well as unilateral sanctions, along with the developments in recent months wherein Iran has hosted more than 300,000 new Afghan asylum seekers, we cannot host the displaced populations any longer.

Obviously, the durable solution to the problem of Afghan refugees and the displaced population is nothing but to help bring peace, stability and prosperity to Afghanistan.

This in turn can only be realized through the establishment of a truly inclusive and representative Government that is committed to not only combating terrorism and organized crime but also guaranteeing and protecting, based on true Islamic teachings and principles, the human rights of all including ethnic, linguistic and religious minorities and women.

We urge the UNHCR to seriously facilitate the voluntary repatriation operations and resettlement of refugees in the third countries.

In this context, it is extremely disappointing that, according to the UNHCR report, the number of resettled refugees plummeted to its lowest level in almost two decades”.

Against this background, we also echo the call by the High Commissioner for the necessity of expanding “the number of countries and the number of places available for this life saving solution, which is an important contribution to burden and responsibility sharing”.

According to the latest report of the UNHCR, 86 percent of the worlds refugees are hosted by developing countries. Most of these refugees are in a few developing States like Iran.

In the absence of adequate international assistance and support, it is indeed unfair and unreasonable to expect these countries to single-handedly bear such a heavy burden.

This situation once again underlines the importance of the strict application of the principles of solidarity and equitable burden- and responsibility-sharing.

Recalling the serious negative impacts of unilateral coercive measures on the global response to the issue of refugees, we strongly call for the immediate removal of all such sanctions.

The Islamic Republic of Iran will continue to play its role in addressing the problems of refugees.