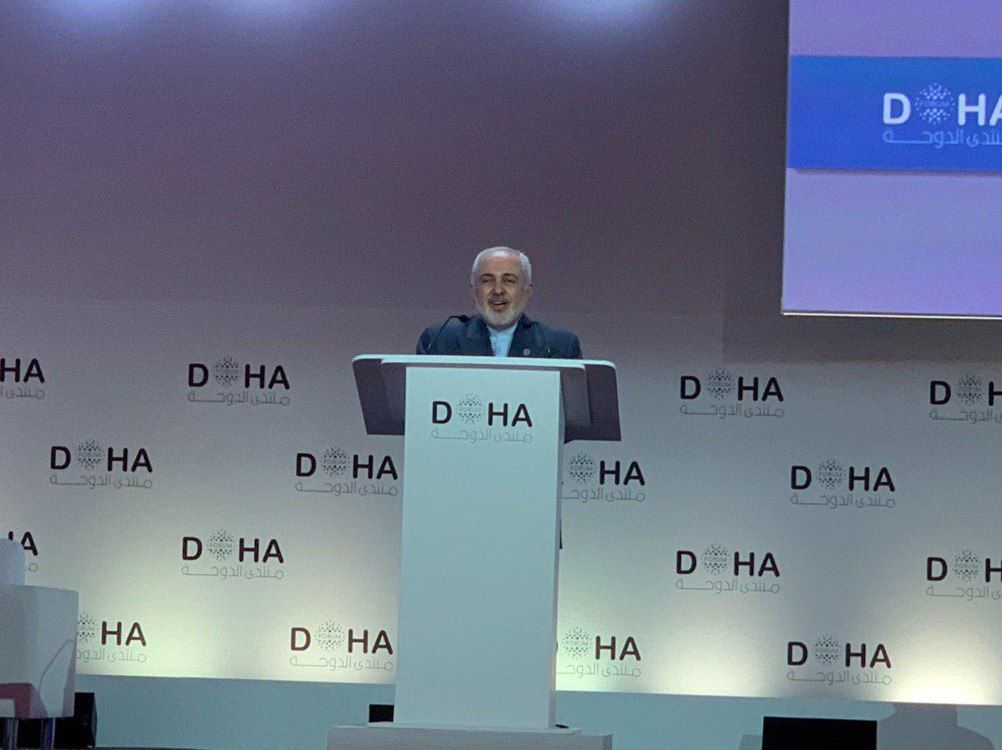 Iranian Foreign Minister Mohammad Javad Zarif has called on regional governments to seize the chance and embrace Iran's HOPE initiative in order to build a better future for next generations.

“We have an opportunity before us to finally and decisively change course, for the betterment of not just our own lives but also those of future generations. We must seize it,” Zarif said on Sunday.

He made the remarks in an address to the Doha Forum 2019 in the Qatari capital.
What follows is the full text of Zarif’s speech:

It is a great pleasure to participate in the Doha Forum. I congratulate our Qatari friends for organizing this remarkable gathering and thank them for their gracious hospitality.

While we enjoy tranquility and security here in the heart of West Asia, our region is in severe turmoil.

I believe the root cause of the multiple and chronic crises we face lies in a cognitive disorder: a disorder that is not just afflicting countries in the region but also global powers. And that is why I believe fora such as this prestigious gathering provide unique opportunities to try to uncover our presumptions, deconstruct our assumptions and think together on a way out of the current regional predicament.

The first and most persistent cognitive disorder is the zero-sum approach to global issues. Far too many continue to believe that even in our interconnected world—where everything from trade and the environment to information and even emotions are globalized—one can gain at the expense of others. That one can have security through depriving one’s own neighbors of the same. That has never worked. It will never work.

Security—just like climate change—does not know borders and is thus indivisible.

But that is not all.

The disparities in power, geographic size, natural and human resources and the like among countries in our region have led to disastrous conclusions.

Some global actors look at these disparities and the unending rivalries in the region as an opportunity: indeed, as providing a fertile ground to expand their military presence and to sell more weapons to nearly all sides in the region. But this outside presence has neither enhanced the security of outside actors, nor that of the region.

Indeed, it has only led to disasters, from the downing of an Iranian civil airliner by USS Vincennes in 1988 to the rise in extremism as a natural consequence of the US presence in Iraq and Afghanistan—an outcome we had predicted as early as 2001.

As for weapons trade, the Persian Gulf states accounted for nearly ONE QUARTER of GLOBAL ARMS IMPORTS during 2014-18, almost DOUBLING on average compared to the preceding five years. Unsurprisingly, the United States sold most of these lethal arms. But the real question is: have these vast U.S. arms sales to this region recovered anything even remotely close to the 7 trillion dollars that President Trump himself has acknowledged as having been wasted in our region since 2001?

To be fair, global powers do not have a monopoly over this cognitive disorder. Unfortunately, nobody does.

Some regional actors consider disparities as an opportunity to achieve regional hegemony.

Saddam Hussein’s invasions of Iran and Kuwait, the Saudi blockade against Qatar and the war in Yemen are but examples of catastrophic miscalculations to use misperceived opportunities to achieve regional hegemony.

And most in this region, enjoying the abundance of wealth brought by petrodollars, believe that everything can be bought. Certainly, arms – including the most sophisticated ones—can be purchased in abundance. Sadly, even some foreign policies can be bought by the highest bidder too.

But can security be purchased? Can regional stability be bought?

Distinguished Friends,
None of us—nor the global community at large—have benefitted from this prevailing paradigm. We in Iran—very much like our friends in Qatar—believe that we need a fundamental paradigm shift in our region, based on a cognitive readjustment and recognition of the imperative of a regional security and cooperation arrangement under the UN umbrella. This is not new: indeed, we have been proposing this since 1985.

The recent proposal of President Rouhani to launch the Hormuz Peace Endeavor—or HOPE—is a continuation of our longstanding commitment to an inclusive and comprehensive regional framework for constructive engagement.

HOPE is based on the recognition of the responsibility of every state in the region to ensure peace, stability and prosperity in our neighborhood and benefit from it. It is based on the assumption that the region and the world have a common and vital interest in maintaining freedom of navigation and energy security FOR ALL.

Through HOPE, our aspiration is to promote solidarity, mutual understanding and peaceful and friendly relations and cooperation among all States of the region;
To ensure the territorial integrity, political independence and international boundaries of all regional States;
To cooperate in eradicating terrorism, extremism and sectarian tensions; and
To promote peaceful resolution of all regional tensions and conflicts through enhanced communication and early warning.

To achieve these objectives, we propose adherence to common principles such as dialogue and mutual respect; equal footing; respect for each other’s sovereignty; rejection of the threat or use of force; and non-aggression and non-intervention in internal or external affairs of each other.

We in Iran believe that a new regional approach should be the outcome of collective deliberations.

President Rouhani has shared our initial thoughts with all leaders of littoral states of the Persian Gulf, inviting them to enrich these ideas and participate in their implementation.

We should use fora like this to collectively elaborate the principles and the roadmap. We can envisage a broad spectrum of cooperation areas, from energy security to arms control, early warning systems and the establishment of a WMD-Free Zone. We can propose and agree upon confidence-building measures from water management to nuclear safety or even military contacts and visits.

We can begin the process or culminate our endeavors with the conclusion of an inclusive non-aggression and non-intervention pact among the Hormuz community.

We should involve our private sectors and academia in formulating and implementing these ideas.

Distinguished Friends,
While many can argue that a paradigm shift based on regional cooperation and confidence-building may not be realistic, they do not have much to show for the realpolitik paradigm that has repeatedly been tried and failed over the past 4 decades.

There is a caveat. Like the nuclear accord, no good idea can be pursued by only one party and no agreement can be implemented solely by one side.

Short-sighted behavior is contagious. While everyone could have benefited from the paradigm shift that the JCPOA promised—as a foundation and not a ceiling—it cannot be expected from a single party to be forthcoming while others are pursuing an opposite path.

We have an opportunity before us to finally and decisively change course, for the betterment of not just our own lives but also those of future generations. We must seize it, and with vigor.
Thank you for your attention.