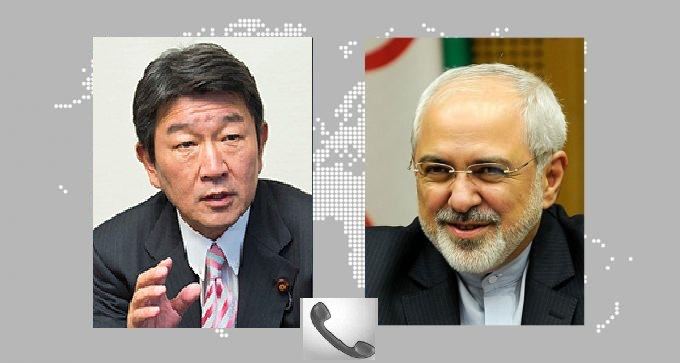 In the telephone conversation, Foreign Minister Zarif and his Japanese counterpart talked about Tehran-Tokyo bilateral relations as well as the regional and international developments.

Foreign Minister Zarif hailed the election of Yoshihide Suga as Japan’s prime minister and congratulated Motegi on his re-election as the minister of foreign affairs of Japan.

He also expressed hope that Mr. Suga’s administration would continue Japan’s previous policy of striving to play a role in contributing to regional stability.

Foreign Minister Zarif also stressed that Iran should be able to use its foreign currency resources held in Japan, condemned the US regime’s illegal restriction on Tehran’s access to those funds, and denounced the limits preventing the purchase of medicine and foodstuff for the Iranian people as a crime against humanity.

The Iranian foreign minister also expressed gratitude to Japan for supporting Iran in the fight against the coronavirus pandemic, hoping for the expansion of cooperation and bilateral ties between the two nations.

On the 2015 Iran nuclear deal, Foreign Minister Zarif said it is highly significant that every effort would be made to have the other parties honour their commitments under the JCPOA.

Highlighting Iran’s active and constructive role in the establishment of peace and stability in the region, Zarif said, “The presence of foreign forces would not only not be of any help, but would further complicate and aggravate the problems in the region.”

For his part, Japanese Foreign Minister Motegi thanked Foreign Minister Zarif for offering congratulations, and stressed the need to strengthen cooperation in the battle against the coronavirus pandemic and delivering medical supplies by using Iran’s financial resources.

Japan’s policy of striving for stability in the Middle East has not changed, he noted, adding that Tokyo has always supported the JCPOA and will continue to do so.