Iran has called on the member states of the Conference on Interaction and Confidence-Building Measures in Asia (CICA) to counter United States’ economic terrorism amid the COVID-19 pandemic.

The comment was made by Reza Najafi, the director general for international peace and security at the Iranian Ministry of Foreign Affairs, who represented Iran at a meeting of senior officials of member states of the Conference on Interaction and Confidence-Building Measures in Asia (CICA).

The event chaired by Kazakhstan was held via video conference on December 11, 2020.
The meeting was themed on reviewing the situation of the region and using member states’ experience in fighting the coronavirus pandemic aimed at boosting their development and cooperation with one another.

Iran’s delegate at the meeting congratulated Kazakhstan on assuming the presidency of CICA for the years 2020-2022 and wished its new Secretary General Kairat Sarybay success. 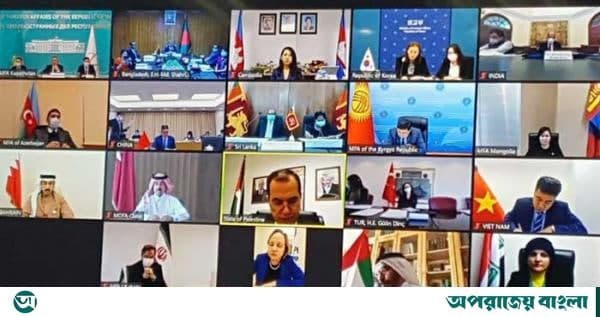 In his speech, the Iranian representative touched upon hot-button issues such as fighting the COVID-19 pandemic as the biggest global crisis, the importance of constructive and efficient cooperation in the regard, countering unilateralism and boosting multilateralism, the necessity of making sure that all humans across the world have equal access to the COVID-19 vaccine, opposition to pursuing any illegal moves, countering the destructive effects of the United States’ coercive and unilateral moves and economic terrorism on the campaign against the coronavirus pandemic.

He also appreciated relentless efforts by different state and private institutions which are seeking to find a way to end the coronavirus crisis.

Elsewhere in his remarks, he referred to the assassination of top Iranian scientist Mohsen Fakhrizadeh, saying most CICA members have already condemned the terrorist act.
Najafi said the assassinated scientist played a key role in medical and peaceful nuclear activities, especially in the development of the first Iranian coronavirus diagnosis kit and supervising the production of the vaccine.

He highlighted the perpetrators and the terrorist regime behind Fakhrizadeh’s assassination will pay the price for their crime in due time.

He also said Iran is fully prepared to work with other CICA members in exchanging expertise and knowhow on all issues of mutual interest, especially the COVID-19 pandemic.
A meeting of senior officials of CICA is held biannually aimed at making decisions on the implementation of agreements reached and decisions adopted at meetings of CICA heads of state and ministers.