The Ministry of Foreign Affairs of the Islamic Republic of Iran says Tehran is monitoring the developments on the field at Syria’s Idlib and the regional consequences of the conflicts closely and with sensitivity, stressing the need to manage and calm the current tense situation immediately.

“Considering the previous decision made by the heads of the Astana Process to hold the meeting in Iran, the Islamic Republic of Iran reaffirms that it will continue its efforts to convene the meeting at the current delicate situation,” the Iranian Foreign Ministry said in a statement on Friday.

“Iran believes that the meeting could be an effective step in the continuation of the previous agreements of the Process on the fight against terrorism, on the avoidance of any damage to civilians, and on the political settlement of the differences,” it added.

“The Islamic Republic of Iran condemns the measures taken by the third parties to impair the (Astana) Process, particularly by the United States of America that has always sought to create tensions in the region in an irresponsible manner and has also announced that it is present in Syria for the purpose of plundering that country’s oil resources,” the statement read.

It finally noted that the Islamic Republic of Iran stays in close contact with its partners in the Astana Peace Process and will keep up efforts to end the current strained situation.

Idlib remains a flash point amid Turkey’s increased military presence in the region.

The ongoing Syrian government offensive in Idlib was launched in August last year after terrorists failed to honor the Sochi de-escalation zone agreement brokered between Russian and Turkey in September 2018.

The so-called Syrian Observatory for Human Rights reported that 34 Turkish soldiers had been killed in airstrikes in the area on Thursday. 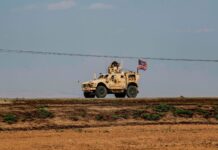