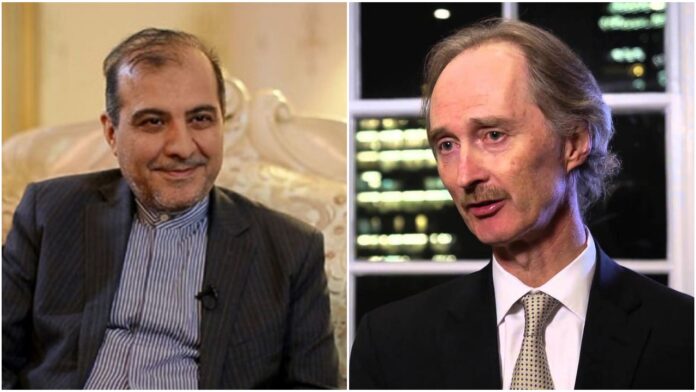 In a telephone conversation on Wednesday, Pedersen and Khaji discussed the latest political and on-the-ground developments in Syria, an upcoming virtual summit of the Astana Process guarantor states, the next meeting of Syria’s Constitutional Committee, the latest situation in Idlib and southern Syria, as well as the economic conditions and the problems that sanctions have caused for the people of Syria.

The Iranian and the UN diplomats deplored the extremely worrying consequences of the unilateral economic sanctions for the life of Syrian people, and stressed the necessity of increasing humanitarian assistance to counter the sanctions and proceeding with the political process for the peaceful settlement of the Syrian issue.

In the telephone conversation, the senior assistant to Iran’s foreign minister condemned the illegal and inhumane sanctions imposed by the US, calling for the removal of the bans.

Khaji also noted that the new US sanctions, known as the Caesar Act, have been imposed with the purpose of putting pressure on the Syrian people and pursuing the US’ illegitimate objectives by resorting to economic terrorism, stressing that such hostile measures could not undermine the Syrian people and their allies’ determination to continue supports for that country’s people and legitimate government.