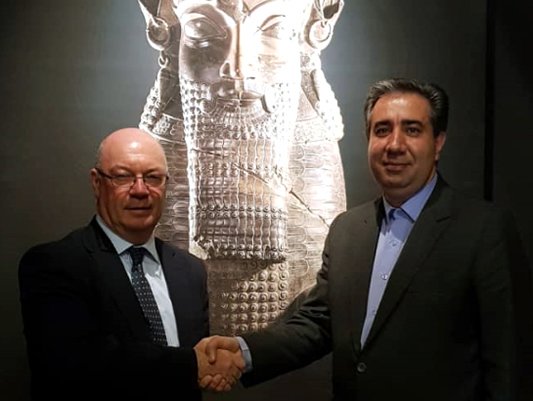 Britain’s Minister of State for Middle East Alistair Burt and Director of the National Museum of Iran Jebreil Nokandeh have reached an agreement on expansion of museum collaborations between the two countries.

The deal was reached after the visit of Burt, British Ambassador to Tehran Rob Macaire, and their entourage to the National Museum of Iran.

Following the visit, the British delegation and the Iranian museum chief Nokandeh discussed the expansion of mutual ties in the field of museums and the importance of holding joint exhibitions to put Iranian and British works on show for the people of the host country.

At the meeting, Burt noted that he was a signatory to a license to transfer the Cyrus’s Charter to Iran and its display at the National Museum of Iran, highlighting the role of museums to promote bilateral relations between the two countries

For his part, Nokhandeh expressed hope that the British Foreign Office would play a special role in organising the forthcoming exhibition of the British Museum’s works in Tehran, and would assist the two museums in cultural diplomacy.

During the meeting, the British Ambassador also expressed his readiness for scientific cooperation in the field of museums and archaeology.

Burt arrived in Iran on Friday in the first visit to the Islamic Republic by a British minister since the withdrawal of US President Donald Trump from the 2015 nuclear deal.

They also exchanged views on the bilateral monetary arrangements in wake of the unilateral US sanctions.