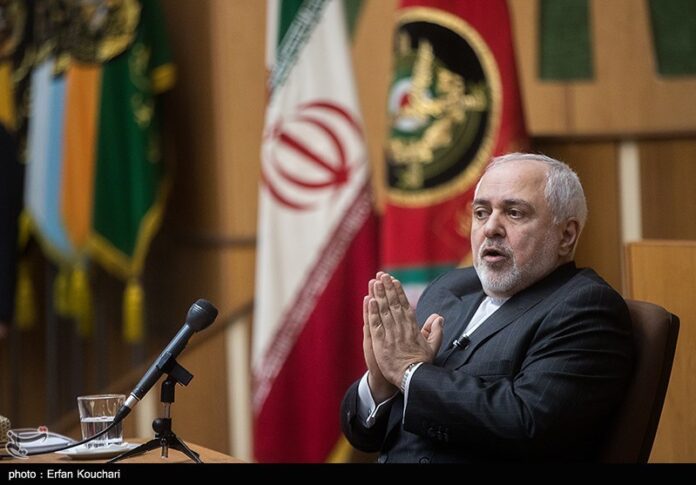 Iran’s Foreign Minister Mohammad Javad Zarif says the transaction channel launched thanks to the “efforts” made by the Swiss government is by no means a sign of the US good will.

Speaking to reporters on Monday, Zarif said the first transaction which took place yesterday through the new payment mechanism “does not even show that the US has taken the slightest measure in accordance with its obligations under the interim order of the International Court of Justice, let alone its commitments under the JCPOA.”

Describing the Swiss channel as “a very small step,” Zarif said “the Swiss government made efforts, and we appreciate their efforts, but this is by no means a sign of US good will.”

Zarif noted that Iran has a plan under consideration to add “those spreading economic terrorism” against the country to the list of organizations sanctioned by the Iranian government. “One of the organizations active in the area of reinforcing US economic terrorism against Iran is United Against Nuclear Iran, whose whole name from beginning to end is a pack of lies,” said Zarif.

Regarding EU Foreign Policy Chief Josep Borrell’s visit to Iran, Zarif said “Mr. Borrell made a request for the visit, and we are waiting to see what he has to say.”

He also pointed to a 14-page letter he submitted to the EU Foreign Policy Chief, and said “the letter emphasizes, with undeniable documentation, the fact that Iran is the country which has the right to use the Article 36. They failed to use the article, and committed flagrant breach of JCPOA. Thereupon, we took compensatory measures [considered in] the article 36.”

He made the remarks in an address to the military professors and cadets at the Iranian Army’s University of Command and Staff.

Elsewhere in his remarks, Foreign Minister Zarif pointed to the martyrdom of top Iranian commander Lt. General Qassem Soleimani, saying the people of Iran and the region grieve over the loss of a great man who was the symbol of insight, wisdom and humility for the region.

The foreign minister also noted that the blood of the revered martyr will undoubtedly serve as a source of blessings for the Islamic Revolution.

Foreign Minister Zarif hailed the mass gatherings in commemoration of General Soleimani in Iran, India, Russia, Latin America and even in the United States as one of the impacts of martyrdom of the devoted general, noting that a new era has begun thanks to the blood of martyrs, including General Soleimani.

The top Iranian diplomat further pointed to a major evolution of the structure of international relations, adding, “Today, the elements of power are not evaluated merely on the basis of military components, while the semantic factors of power have taken on great significance. The power of people and beliefs in our country are among the major components of semantic power. As a result, unlike a country that has purchased $67 billion of arms but still depends on the others for ensuring its security, the Islamic Republic of Iran has taken its power from the people.”

“We must employ all of our instruments. Without the presence of people at the ballot boxes, we wouldn’t have had the power to hold talks with six countries in the JCPOA negotiations. We believe that we negotiated well. Those hammering the negotiations are in fact hammering the people. As the foreign minister, my duty is to steer this power to a lasting achievement. Negotiation does not mean surrender,” he added.

Foreign Minister Zarif further highlighted a shift in the centers of power in the international arena, stressing, “Today, the West is no more considered as the center of power, and the world has entered a new age, and such upheaval has been a benefit to us and a loss to the hegemonic powers. We must recognize that the US is no more a superpower. Imam (Khomeini) had also stated that America cannot do a damn thing.”

The Iranian foreign minister then touched on the ominous deal of the century, and criticized certain Arab states for failing to withstand the Zionist regime’s demands.

“As the JCPOA could lay bare the fake image of the US and the Zionist regime and destroyed plans for making Iran a security issue, the ominous deal of the century can also upset the depiction of the Islamic Republic of Iran as an enemy in the Arab world,” Zarif added.

“Our goal must be to serve the people, not to create bipolarity which would shatter the tools of our own power so that the enemy would take advantage of it. No post or election could be worth enough to let the enemy gain such concession,” Foreign Minister Zarif underlined.