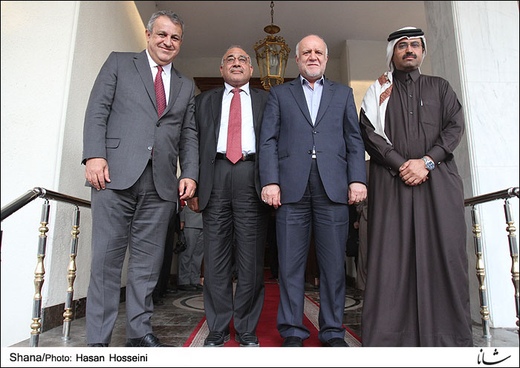 Iranian Minister of Petroleum Bijan Zangeneh said Tehran supports any move to stabilize the situation in the international crude oil market and improve the price of the product.

Speaking to reporters following a joint meeting among ministers of oil and energy of Iran, Iraq, Venezuela, and Qatar here on Wednesday, he said, “Today we had a good meeting and the report of yesterday’s meeting (in Doha) was presented. We welcome cooperation between OPEC and non-OPEC (producers).”

“The decision taken so that OPEC members and non-OPEC (countries) freeze their production ceiling in a bid to stabilize the market and improve prices in the interest of consumer and producer is also supported by us,” he told reporters.

He added that participants of the Tehran meeting were briefed about Iran’s return to the market in the post-sanctions era and said, “We discussed about this issue with the Iraqi, Qatari, and Venezuelan ministers of oil and energy and they viewed the reality with a logical view.”

“I hope that with the efforts which have been initiated, we would witness improvement of the market’s situation in future,” Zangeneh said.

Regarding the effect of a recent meeting between OPEC members and non-OPEC countries, the Iranian minister said, “One should wait to see its effect on prices.”

“As I said, this is the initial step and we have to look at it positively. Buy I think everybody agrees that we have to monitor the market situation and reaction and to consult on the next steps if necessary,” he said.

Referring to non-OPEC countries’ readiness to cooperate, Zangeneh said, “As I was told, Russia in the capacity of the world’s largest oil producer, Oman and other countries have expressed their joining up which is a positive move and we approach it in a positive way.”

“This is good start,” the Iranian minister said.