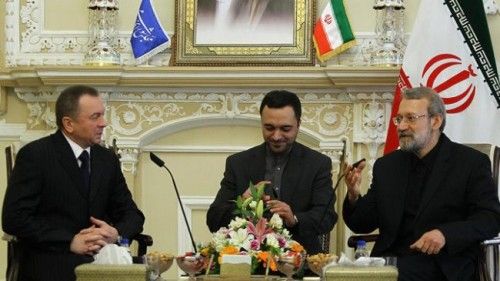 Iranian Majlis Speaker Ali Larijani has underscored the need for the further enhancement of “friendly” relations between Iran and Belarus in all areas, particularly in the parliamentary sphere.

in a meeting with Belarusian Foreign Minister Vladimir Makey in Tehran on Monday, the Iranian speaker said Tehran seeks to forge “long-term” and “strong” relations with Minsk in various domains.

“The Majlis emphasizes [the need for] the expansion of friendly relations in various political, economic and industrial areas, particularly the parliamentary ties between [Iran and Belarus],” Larijani stated.

The Iranian Majlis speaker also pointed to the previously signed agreements between Iran and Belarus, saying the two countries should work to complete their joint projects.

Makey, for his part, described the Islamic Republic as an important and effective country in the Middle East, saying the common views of Tehran and Minsk on different global issues have paved the way for the further expansion of their ties.

The Belarusian foreign minister also described the US-led sanctions against Iran as unjust and stressed that Belarusian companies have always sought active participation in the Iranian market.

Makey also emphasized the need for Iran and Belarus to exchange views on the issues of regional and international significance, including the crisis in Ukraine.