Iran to stand by Iraq in fighting ISIL: Larijani 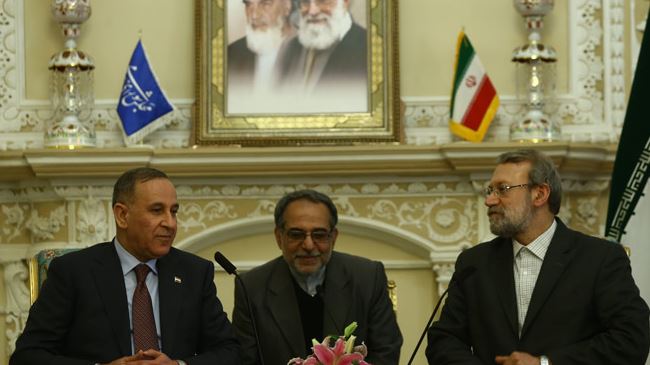 Iran’s Parliament Speaker Ali Larijani says the country will continue to stand by the Iraqi government and nation in the fight against ISIL terrorists.

“The Islamic Republic of Iran has been trying to help establish democracy and a national unity government in Iraq since the beginning of the new era in the country and now that Iraq suffers from the scourge of the ISIL terrorist grouping, the Islamic Republic considers it a duty to help its Iraqi brothers,” Larijani said during a meeting with Iraqi Defense Minister Khaled al-Obeidi in Tehran on Tuesday.

Larijani added that Iran has stood and will stand by the Iraqi government and people.

The Iranian official said big powers created terrorism in a bid to undermine the trend of development and democracy in Syria and Iraq and now the scourge threatens the entire region.

Larijani also praised the reinforcement of the national unity government in Iraq and said solidarity among different Iraqi groups would help resolve problems and development.

Obeidi, for his part, praised Iran’s help to his country in different areas. He also said Baghdad is resolute in wiping out terrorists in the country.

The Takfiri ISIL militants hold some parts of Iraq and Syria under their control.

Iraqi forces, supported by the nation, have made gains against the terrorists in different parts of the Arab country, liberating towns and villages.

Iran has said, on numerous occasions, that it does not engage in military acts in Iraq but only provides advice to the Baghdad government in the fight against militants.