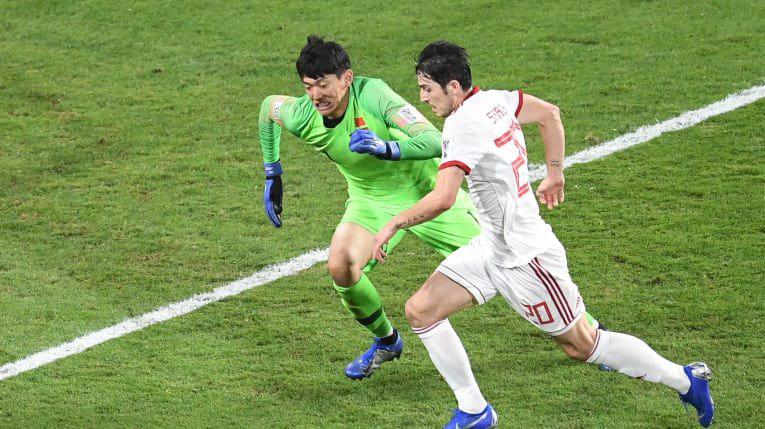 A consummate performance by Sardar Azmoun laid the foundation for the Islamic Republic of Iran’s 3-0 win over China PR as Team Melli eased into the AFC Asian Cup UAE 2019 semi-finals on Thursday.

The livewire 24-year-old forward was in superb form throughout, setting up Mehdi Taremi for the Iranian opener and scoring himself to further underline his burgeoning reputation.

The Iranians are now set to face Japan – albeit minus Taremi who will be suspended after picking up his second yellow card of the competition – in the semi-finals on Monday.

Iran began brightly at a wonderfully atmospheric Mohammed bin Zayed Stadium, with Azmoun having a firm header cleared off the line by Zheng Zhi and then flashing a shot narrowly wide just later.

Team Melli’s impressive early dominance was, though, to pay handsome dividends in the 18th minute when they took the lead. Azmoun robbed a hesitant Feng Xiaoting before squaring the ball to Taremi who fired home with ease to register his third goal of the tournament.

The Iranians then spurned a glorious chance to double their advantage when Mohammad Kanani found Taremi from captain Ashkan Dejagah’s free-kick only to see the Al Gharafa star somehow miss the target from only three yards.

With Omid Ebrahimi pulling the strings to great effect in midfield, Iran’s second was, however, not long in coming, as another long ball caught saw Azmoun out-muscle Liu Yiming before the 24-year-old rounded goalkeeper Yan Junling to score shortly after the half-hour mark.

To their credit, two-time runners-up China held firm in the wake of Azmoun’s strike to head into the interval with a glimmer of hope following what had been an exhilarating first half display by their opponents.

In truth, the pattern of play changed little after the break as Taremi and Kanani looped headers narrowly over the bar, before Alireza Jahanbakhsh curled an effort narrowly wide of Yan’s left-hand upright on 58 minutes.

With China struggling to find a way back into the game, Yan then produced a fine stop to deny Ehsan Hajisafi as Iran threatened to add a third and put the result beyond doubt.

Substitute Yu Dabao missed from close-range with 10 minutes remaining to realistically end Chinese hopes of a revival, leaving Azmoun to depart the scene to a standing ovation in the final moments and Karim Ansarifard to net again for Iran after yet another defensive error.