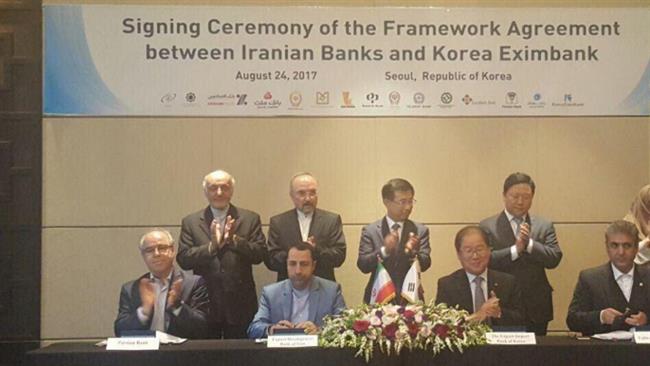 The framework agreement between Iranian banks and Korea Eximbank was signed in Seoul on Friday, under which the Korean side will provide an 8 billion euro ($9.4 billion) loan to finance various projects by South Korean companies in Iran.

“The spell of the capital flow into Iran was broken,” the daily Sharq headlined on its front page, while the daily Shahrvand described it “Seoul’s golden loan to Tehran.”

“The 8 billion euro finance by the Koreans will break a big barrier. Those banks that were afraid of cooperating with Iran can now finance Iranian projects. It is expected that after the Korean banks, Japanese banks and later European banks will be more comfortable working with Iran,” the state news agency IRNA wrote.

The financial daily Jahan-e San’at carried an article by Governor of Central Bank Valiollah Seif, saying the loan was a sign of “return of global trust in Iran’s banking system,” following problems created by sanctions for the country due to the suspension of international financing contracts.

“As a result of the tyrannical and illegitimate sanctions against the country, not only the provision of new credit lines to finance the construction and production projects of the country was stopped, but the repayment of some of the former loans was also hampered by the disappearance of payment channels,” Seif wrote.

“Following the nuclear deal and lifting of sanctions, one of the first steps taken was to settle former debts, which resulted in improving the country’s credit rating. Now, after extensive and long negotiations, we see that new financing contracts bear fruit one after the other and are finalized,” he added.

Seif said, “I hope we will be able to announce more good news in the days and months ahead.”

He said the loan will facilitate several development and production projects and it showed the international community was ready to restore “long-term” banking ties with Iran.

The celebratory tone on Saturday, mostly reflected in the pro-government media, also exposed the pressure which President Hassan Rouhani is facing because of his administration’s nuclear agreement with the West and rising questions about its tangible results for the country.

Hardly a week into his new term, the government is fighting a new push by the US to undermine the Joint Comprehensive Plan of Action (JCPOA), as the nuclear accord is known.

President Rouhani has spent much of his political capital on the nuclear accord in his bid to revive Iran’s economy and cut unemployment through bringing in foreign investment.

According to the objectives of the sixth five-year development plan (2016-21), $65 billion of foreign investment should be absorbed in various sectors, deputy director of the foreign investment office of Organization for investment Economic and Technical Assistance of Iran Akbar Qahremani said.

“This expected amount of investment includes $30 billion in finance, $20 billion in economic partnership and $15 billion in direct investment, which requires a change in the attitude of managers and authorities towards attracting these funds in order to realize it,” IRNA quoted him as saying Thursday.

“Capital is cowardly, so to speak, and it does not go where there is no security; this agreement represents the existence of security in the Iranian economy,” member of the Tehran Chamber of Commerce, Industry, Mines and Agriculture Abbas Argoon told IRNA on Saturday.

Iran secured its first credit line of $10 billion from the Chinese in 2015 as nuclear negotiations between Tehran and a number of world countries neared a settlement.

According to Argoon, “increasing foreign investment, foreign contracts, and foreign facilities encourage other countries to enter the Iranian economy.”

“The Iranian economy is in need of financing at a cheaper rate than the banking system; the government must provide a place for the entry of foreign capital,” he said.

However, it is not enough to bring resources only and there is need to have effective resource management where these resources are spent on sectors that have economic advantage, leading both to economic growth and employment opportunities.