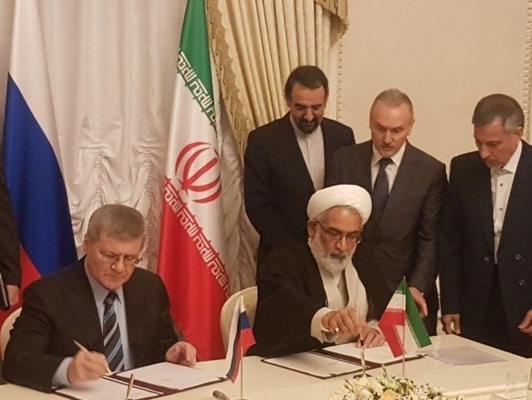 TEHRAN (Tasnim) – Top judiciary officials from Iran and Russia signed a memorandum of understanding on cooperation between the prosecutor general offices of the two countries.

In a meeting on the sidelines of the 15th Session of Prosecutors General of the Shanghai Cooperation Organization (SCO) Member States in Russia, Iranian Prosecutor General Mohammad Jafar Montazeri and his Russian counterpart Yury Chaika explored avenues for enhanced judiciary cooperation between Tehran and Moscow.

They also discussed extradition of criminals and joint efforts in dealing with crimes connected with new technologies.

The two officials signed the cooperation agreement at the conclusion of the meeting.

Heading a high-ranking delegation, Montazeri has travelled to Russia’s St. Petersburg to join his counterparts from the SCO states.

The SCO is an intergovernmental international organization, established in June 2001 in Shanghai by Kazakhstan, China, Kyrgyzstan, Tajikistan, Russia and Uzbekistan.

At a summit in Uzbekistan in June 2016, the SCO leaders signed memorandums on the accession of India and Pakistan to the organization.

The organization seeks to strengthen mutual trust and good neighborly ties between the member countries, contribute to regional stability and facilitate cooperation in different sectors, including political, trade, economic and energy issues.