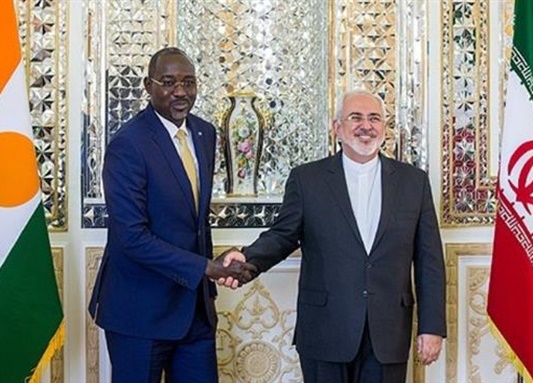 “Iran and Niger enjoy [before them] a vast area for cooperation in different sectors,” Zarif said in a meeting with Niger’s Foreign Minister Ibrahim Yacouba in Tehran on Monday.

“Iran and Niger can have more close cooperation in various political, economic, regional and international fields and the Islamic Republic of Iran is ready to expand relations and deepen cooperation with Niger,” he added.

The top Iranian diplomat noted that the two countries have the potential to cooperate in the economic arena including infrastructures, transportation, banking interaction, agriculture, mines, energy and investment.

Niger’s foreign minister, for his part, said Iran plays an important role in the region and across the world and expressed his country’s readiness to bolster relations with the Islamic Republic.

Niger is ready to open an embassy in Tehran and keen to hold more consultations and political talks with Iran, Yacouba added.

He called for a session of the two countries’ joint economic commission to be held as soon as possible and invited his Iranian counterpart to pay an official visit to Niamey.

Meanwhile, in a meeting with the Cypriot House of Representatives Demetris Syllouris in Tehran on Monday, the Iranian foreign minister said the Islamic Republic welcomes growing cooperation with Cyprus in cultural, political, economic and scientific fields.

Zarif said the two countries have maintained amiable relations over the recent decades.

He expressed hope that Tehran and Nicosia would also strengthen cooperation in tourism, science and modern technologies as well as biotechnology.

For his part, the president of the Cypriot House of Representatives said his country is ready to hold further consultations with Iran in an attempt to boost ties at an international level.

Syllouris arrived in Tehran on Sunday on a three-day visit at the invitation of Iranian Parliament Speaker Ali Larijani. He held talks and attended a joint press conference with the top Iranian parliamentarian on Sunday and met with Secretary of the Supreme National Security Council Ali Shamkhani and Chairman of the Expediency Council Akbar Hashemi Rafsanjani earlier on Monday.