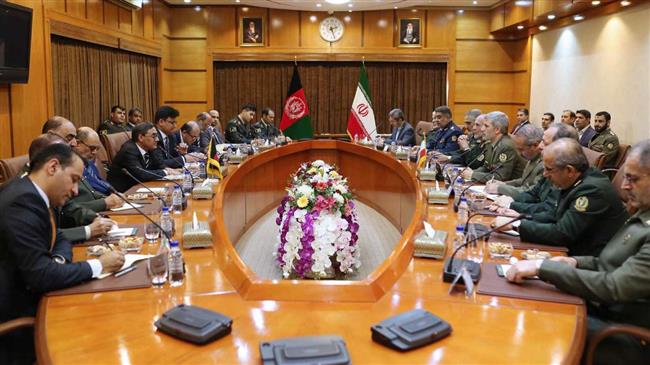 Iran's Defense Minister Brigadier General Amir Hatami says the emergence and expansion of the Daesh Takfiri terrorist group in Afghanistan is a "very dangerous phenomenon," expressing Tehran's readiness to cooperate with Kabul in the fight against terrorism.

“We regard ISIS as the security tool of the US and hegemonic powers to create insecurity in the region. So, the eradication of ISIS is among the policies of the government and Armed Forces of the Islamic Republic of Iran,” Hatami said in a meeting with Afghan Defense Minister Tariq Shah Bahrami in Tehran on Saturday.

“We believe that Afghanistan should not turn into a place for regional and international rivalries, rather it should be a center for regional cooperation,” he added.

He noted that Leader of the Islamic Revolution Ayatollah Seyyed Ali Khamenei and the Iranian government have always stressed the importance of bolstering cooperation with Afghanistan in all political, economic, cultural, security, defense and military fields.

Late in January, Ayatollah Khamenei said the United States has been relocating ISIS from the Middle East to the South Asian country to rationalize its military presence in the region.

By transferring the ISIS terror group from Iraq and Syria to Afghanistan, the US seeks “to justify the continuation of its presence in the region and to create security for the Zionist regime,” the Leader said.

Later in February, Iran’s top military commander said the United States is transferring ISIS to Afghanistan now that the terrorists have lost their strongholds in Iraq and Syria.

Chief of Staff of the Iranian Armed Forces Major General Mohammad Baqeri said that continued tensions in Southwest Asia would provide Americans with the much-desired pretext to prolong their military presence there.

The Afghan defense minister, for his part, said enemies intend to spread instability in Afghanistan and disintegrate the country.

As a friendly and neighboring country, Afghanistan would never allow any country to use the Afghan territory to carry out an act of aggression against Iran, Bahrami added.

He noted that both Iran and Afghanistan aim to fight terrorism, particularly the ISIS terror group, and said the presence of terrorists would increase insecurity and instability across the region.

He said the Afghan government seeks to boost close cooperation with Iran as an influential country in the region.