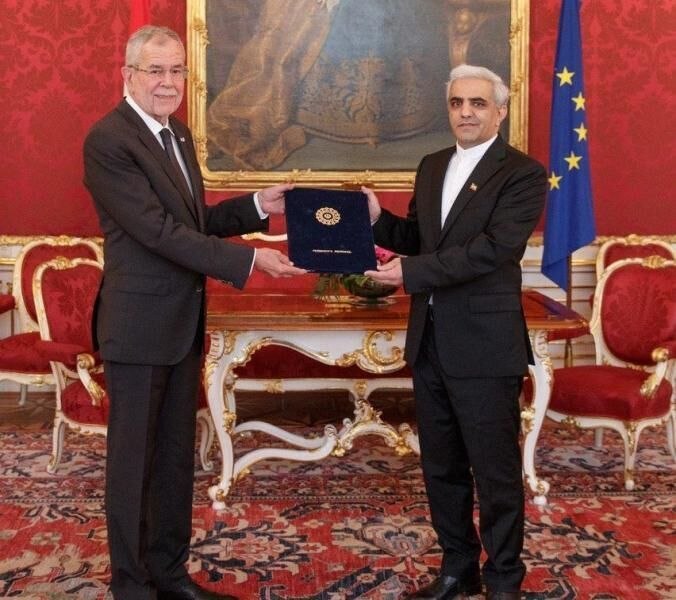 The Islamic Republic of Iran’s incoming ambassador to Austria has held a meeting with the European country’s president, expressing Tehran’s preparedness to promote its relations with Vienna in all fields.

In the meeting, held with a special ceremony attended by Austria’s presidential ceremonial guard, the Iranian ambassador conveyed a message of friendship from the Islamic Republic of Iran’s president and expressed the country’s readiness to enhance relations with Austria in all political, economic, cultural, and social fields on the basis of the historical and age-old relations between the two countries.

For his part, the Austrian president conveyed his warm greetings to Iranian President Hassan Rouhani, pointed to President Rouhani’s landmark visit to Austria in July 2018 and a telephone conversation between the two presidents in May 2020, welcomed the expansion of relations between the two countries, and expressed Austria’s readiness to help promote the ties.

Baqerpour Ardakani has already served in top jobs at the Foreign Ministry. He used to serve as Director-General for Legal and International Affairs at the Iranian Ministry of Foreign Affairs, the Iranian Foreign Minister’s assistant, and the Islamic Republic of Iran’s ambassador and deputy representative at the United Nations Office at Geneva.

He is currently serving as the Islamic Republic of Iran’s accredited ambassador to Slovakia too.