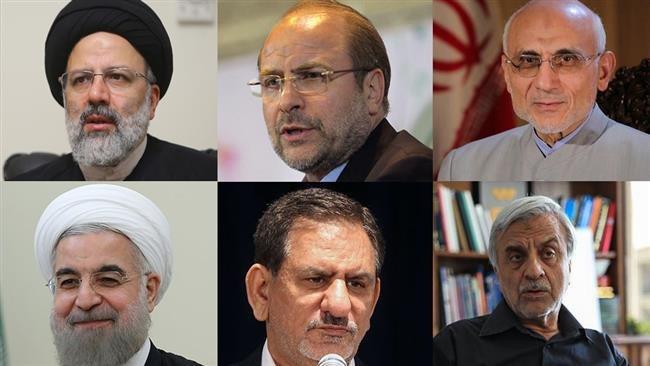 Iran’s election campaign heats up with the six presidential hopefuls vying for the position of the country’s chief executive.

In an address to his female supporters in a stadium in the capital Tehran on Tuesday, President Hassan Rouhani, who is seeking reelection, said his performance obviously reflects his opposition to “gender discrimination” and “gender oppression.”

“The [1979 Islamic] Revolution was a success because women entered the scene. Today, if women step on the election scene, if all go to the polls, we will definitely be successful,” he said.

The Iranian people have chosen the path of social and political freedom as well as freedom of thought and expression, Rouhani said, adding that he is seeking “genuine security” along with unity.

Addressing his supporters in the city of Kerman, another candidate Seyyed Ebrahim Raeisi highlighted the economic woes gripping Iranians and said the resource-rich nation of Iran does not deserve to be held back by such problems as absolute poverty, youth unemployment and corruption.

He furthered underlined the importance of “self-esteem,” stressing that “revolutionary management” could produce “great honors” for the nation.

Raeisi, a senior judicial official and head of Astan Qods Razavi, also noted that the “main problem in our country is not lack of liquidity, equipment and resources, but rather weak executive and economic management.”

Qalibaf to go for national welfare

Another rival, Mohammad Baqer Qalibaf, told his supporters in the southwestern city of Ahvaz that he will strive to create “welfare, peace and security” for all people, if elected president.

He also highlighted his achievements as the mayor of Tehran and said poverty has no place in the society, blaming poor management for the high poverty rate in a resource-rich country.

Presidential contender Mostafa Aqa-Mirsalim also told students in the city of Isfahan that human resources have fallen into oblivion in Iran, saying progress would be achieved only with the help of educated, dedicated and clean-handed lecturers and students.

The former culture minister also accused the current government of failing to adhere to the principles of resistance economy.

Inflation was lowered under Rouhani’s administration, but it still exists, he pointed out.

Mostafa Hashemi-Taba also said in a televised speech that the main task facing the next administration is to use domestic capital and boost investment.

The former vice president also criticized the distribution of monthly cash subsidies among people and called for moving in the direction of implementing the resistance economy.

First Vice-President Es’haq Jahangiri, who is also running for presidency, said all Iranians should enjoy social and economic justice.

He defended the Rouhani administration’s policies and highlighted the importance of social and economic justice. He also said that the private sector should be assured that it is “the basis for Iran’s economic development.”

Iranians will go to the polls on May 19 to elect the country’s next president. Over 56 million people are eligible to vote.

The six presidential candidates have outlined their plans in two live TV debates so far, with the third televised program scheduled for May 12.