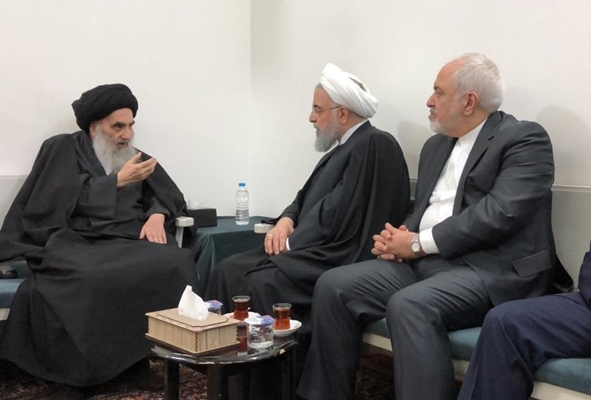 Iranian President Hassan Rouhani has met with Grand Ayatollah Ali al-Sistani, the top Shiite cleric of Iraq, during his trip to the holy city of Najaf.

During the meeting, Ayatollah Sistani said he welcomes any initiative that would expand Iraq’s ties with its neighbours. He said the sovereignty of Iraq must be respected, and other states must avoid interfering in its internal affairs.

He called for balance and moderation in regional policies, and said, “Fight against corruption, improved services, and keeping arms in the hands of the government are the

most important priorities of Iraq.
The senior cleric also underlined the significance of keeping regional nations away from

disasters and collateral damages.
Rouhani, in turn, briefed the top cleric on the results of his talks with Iraqi officials.

The Iranian president met the top cleric after visiting the holy shrine of first Shiite Imam and Prophet Muhammad (PBUH)’s son-in-law, Imam Ali (AS) in Najaf.

The top cleric is known as the spiritual leader of Iraqi Shiite Muslims and one of the most senior clerics in Shia Islam. His fatwas played a significant part in shaping Iraq’s political stage and eradicating ISIS.

In June 2014 – when the Takfiri ISIS terror group unleashed its campaign of destructive in Iraq – Grand Ayatollah Sistani called on his followers to rush to the national army’s help in the fight against the terrorist outfit.

The fatwa helped Shiite fighters, Sunni tribesmen as well as Christian and Izadi volunteers unite under the umbrella of the Popular Mobilization Units (PMU), commonly known as Hashd al-Sha’abi, to reverse ISIS’ gains and ultimately end the terror group’s territorial rule in Iraq in late 2017.