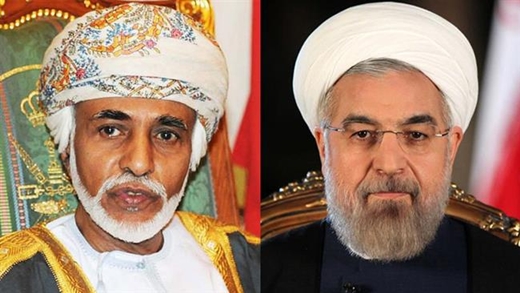 President Rouhani has praised Oman for its constructive role in regional developments, saying that Iran and Oman must cooperate to help end regional crises.

“We are concerned about disregard by the aggressive forces of international regulations and norms, and these actions, particularly attacks on diplomatic sites, should be strongly condemned as an incorrect and inhuman act,” Rouhani said in a phone conversation with Oman’s Sultan Qaboos bin Said on Tuesday.

On September 18, Saudi Arabia bombarded the residence of the Omani envoy to Yemen, Bader al Mantheri, seriously damaging the building and nearby houses in the al-Sabin district. The ambassador survived the attack.

The Saudi attack was condemned by both Iran and Oman.

“Tehran-Muscat regional cooperation, particularly on restoration of peace and stability to the region, is very effective and important,” Rouhani said.

He praised Oman’s stance on regional developments and its humanitarian aid to the Yemeni people and expressed hope that peace and stability would be restored to the war-stricken country.

The Iranian president expressed hope for a ceasefire in Yemen on the occasion of the Eid al-Adha (the Feast of Sacrifice) under the aegis of efforts by Oman and particularly Sultan Qaboos as well as other peace-seeking countries.

Rouhani regretted the international community’s refusal to take serious action for establishing a ceasefire in Yemen.

Saudi Arabia launched military aggression against Yemen on March 26 – without a United Nations mandate – in a bid to undermine the Houthi Ansarullah movement and restore power to fugitive former Yemeni President Abd Rabbuh Mansour Hadi, a staunch ally of Riyadh.

According to Civil Coalition, a Yemeni NGO, 6,091 Yemenis have lost their lives in the Saudi airstrikes and a total of 13,552 people have been injured.

Rouhani also said Iran hopes to strengthen its relations, particularly in economic and trade sectors, with Oman after international sanctions on Tehran are lifted.

The Omani Sultan said his country is willing to enhance ties with Iran, particularly after the removal of sanctions imposed against Tehran.

Sultan Qaboos said Muscat would proceed with consultation with other countries to help establish peace and stability in Yemen and would send more humanitarian aid to the war-hit country.

He also called for an immediate end to attacks on diplomatic missions.