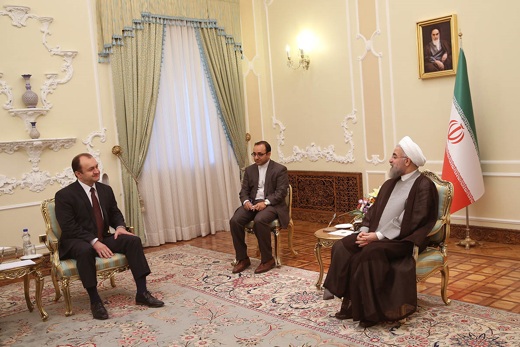 President Hassan Rouhani has called on European governments to fulfill their humanitarian duty concerning tens of thousands of refugees who are fleeing their crisis-hit countries.

President Rouhani made the call in a meeting with new Hungarian Ambassador to Tehran Yanosh Kwach, on Sunday, saying dealing with the refugee crisis is a “great humanitarian mission” assigned to the world, especially Europe.

“It is urgent that governments and countries help these refugees,” Rouhani said.

Rouhani said the current refugee crisis stems from the “threat of violence-seeking extremist groups and terrorism.”

“Terrorism has sparked intimidation and fear in the regional countries and [resulted in] the displacement of innocent people,” he said.

Over the past few days, thousands of asylum seekers have left Hungary, where they had been stuck for days, for Austria and Germany after Berlin and Vienna officials voiced their readiness to receive them.

Pope Francis on Sunday called on churches across Europe to welcome refugee families.

The United Nations estimates 300,000 people have left the Middle East and North Africa for Europe this year, but 2,500 have died in their attempt, mainly through dangerous voyages across the Mediterranean in rickety boats. Media reports, however, say 350,000 have crossed into Europe this year.

The Hungarian ambassador, for his part, described Iran as the cornerstone of stability and security in the region, saying a recent nuclear agreement between Iran and six world powers can be taken as an appropriate example to resolve international issues.

No support spared for Iraq

“We will withhold no assistance” to Iraq, Rouhani said, adding that the primary responsibility for establishing security in Iraq rests with the people and government of the country.

Mussawi, for his part, appreciated Tehran’s support for Baghdad, saying Iraq is willing to broaden its relations with Iran.

The northern and western parts of Iraq have been plagued by violence ever since IS terrorists mounted an offensive in June 2014. The militants have been committing vicious crimes against all ethnic and religious communities in Iraq, including Shiites, Sunnis, Kurds, Christians and others.

The Iraqi army together with fighters from the Popular Mobilization Units has been engaged in operations to liberate militant-held regions.