Iran Praises EU’s Efforts to Save JCPOA, Defy US 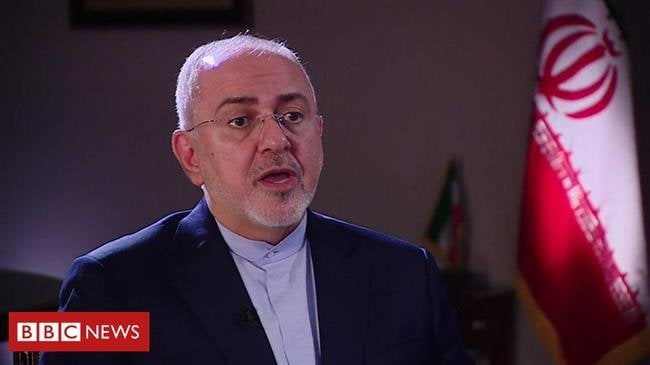 Iran’s Foreign Minister Mohammad Javad Zarif expresses satisfaction with ongoing European efforts to keep the 2015 nuclear deal in place despite the US exit, but says such political will should in the end translate into workable “mechanisms” aimed at ensuring Tehran’s interests.

In an interview with the BBC on Tuesday, Zarif praised the European signatories to the nuclear agreement for defying US President Donald Trump’s pressure and standing by the Joint Comprehensive Plan of Action (JCPOA) — a binding international agreement.

Zarif said UK Prime Minister Theresa May, French President Emmanuel Macron “and everybody else said that we are committed” to the JCPOA and to making sure that “Iran enjoys the economic dividends of the deal.”

“The Europeans probably made better commitments than anybody expected,” said the minister.

Zarif, however, said, making commitments alone are not enough, and called on Iran’s European partners to put into action their political will to neutralize the anti-Iran bans re-imposed by Washington.

Europeans should work “to translate those political commitments into mechanisms and I believe those mechanisms are going to be in place. Now the next test — which is the most important and difficult test — is to see whether those mechanisms work,” he said.

“We are going to be a little bit more patient,” Zarif added.

Back in May, Trump pulled Washington out of the JCPOA despite objections from the other parties.

Besides re-imposing the anti-Iran sanctions it had lifted under the accord, the Trump administration has also been seeking to discourage the European firms from doing business with Iran by threatening them with penalties.

But the other signatories have vowed to try and protect their business links with Iran in the face of US sanctions and keep the JCPOA alive.

Months after scrapping the Iran deal, the US president offered to hold talks with President Hassan Rouhani. Tehran rejected that offer, saying it will not sit at the negotiating table with Washington under pressure and threats.

Intl. relations ‘not about falling in love’

Elsewhere in his interview, Zarif was asked whether a summit between President Trump and President Rouhani, would be impossible.

“Well, nothing is impossible,” he replied. “But the outcome of President Trump’s summit with President Rouhani would be a photo opportunity and a two-page document.”

“We have a 150-page document…which was negotiated word by word not only by Iran and the United States, but by six other powers. And having negotiated that deal and having been involved in this process for a very long time, I can assure President Trump that the US will not get a better deal,” he said.

Asked about Trump’s comments about falling “in love” with North Korean leader Kim Jong-un, Zarif said that international relations are not about falling in love, but about “respecting obligations.”

“The nuclear deal is not a personal deal between myself and John Kerry or president Obama and President Rouhani. It is an international agreement between seven countries and the European Union, which is included in a Security Council resolution,” he pointed out.

“The United States negotiated a deal. You know what happened in the United States when Trump came to office was not a revolution; it was simply a change of administration,” Zarif added.

Separately on Tuesday, the Iranian foreign minister addressed a UN meeting in New York on the JCPOA, where he highlighted the importance of multilateralism.

He emphasized that the Islamic Republic would never tolerate threats, and that pressure would not bring the country to the negotiating table.

Washington’s use of sanctions has undermined the US dollar in the international financial system, he added.