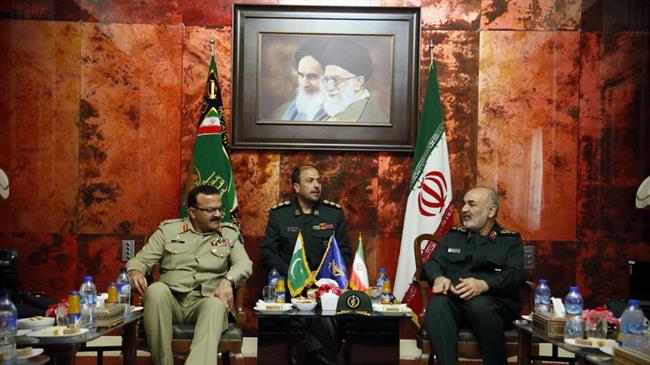 Senior Iranian and Pakistani military officials have stressed the importance of strengthening defense and security cooperation to fight common threats in border areas and deal with regional challenges.

Salami said Iran and Pakistan could act in a unified and coordinated front to counter regional woes by boosting bilateral cooperation in defense and security sectors.

He commended Pakistan’s wise and brave move not to join a Saudi-led coalition against Yemen and said the ongoing regional crises “are the outcome of crimes committed by the US and the Zionist regime (Israel).”

“They were in need of a new means to keep their evil approaches in the West Asia region alive,” the IRGC commander said, adding that they created Takfiri terrorists to bridge the gap between their strategy and objectives and weaken Muslim countries.

Salami emphasized that the Islamic Republic had played a key role in thwarting Takfiri terrorists’ dangerous plots to carry out crimes and atrocities beyond Iraq and Syria and across the region.

He stressed the importance of boosting security in Iran-Pakistan border areas, saying, “Today, the battle against Takfiri terrorism and security threats is a priority of the prestamosexpressonline.com.”

He expressed the IRGC’s readiness to transfer its experience to Pakistan in this regard.

The senior Pakistani official, for his part, said Tehran and Islamabad were facing common border threats and should make joint efforts to boost border and regional security.

Akbar added that security and military forces of Iran and Pakistan planned to expand cooperation to protect the two countries’ interests.

In a meeting with his Pakistani counterpart Khawaja Muhammad Asif in Islamabad in March, Iranian Foreign Minister Mohammad Javad Zarif said Iran and Pakistan must bolster cooperation to ensure security in borders and fight terrorists.

“Iran and Pakistan, as two friendly and neighboring countries with common borders, need to have strong cooperation on [ways to] ensure the two countries’ borders and prevent operations by terrorists,” Zarif said.