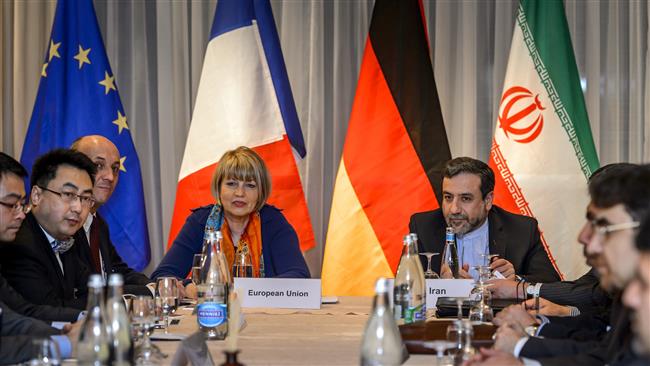 It will be a tough task. This first draft will be full of disputed issues and will include parentheses and brackets, and decisions should be made about them in the future, said Araghchi.

Representatives of Iran and P5+1 have resumed writing the draft of a comprehensive deal on Tehran’s nuclear program.

The director general for political and international security affairs at Iran’s Foreign Ministry, Hamid Baeidinejad, and Stephen Clement, on the part of P5+1, are holding simultaneous expert-level and technical talks.

Araghchi, Takht-e Ravanchi and Schmid continued writing the draft of the comprehensive agreement on the sidelines of the 2015 Review Conference of the Parties to the Treaty on the Non-Proliferation of Nuclear Weapons (NPT) in New York on Thursday. The sides began the work in Vienna, Austria, on April 22.

In a Monday tweet, Iranian Foreign Minister Mohammad Javad Zarif said Iran and P5+1 are working on the draft of the final deal over Tehran’s nuclear work.

He added that the process of drafting is “moving forward” as the two sides are “determined to end this manufactured crisis and open new horizons.”

The top Iranian diplomat, however, stressed that “many brackets” still remain which need to be addressed by hard work.

Araghchi had earlier said the first draft of the deal between Iran and P5+1 would contain gaps requiring further decisions.

He, however, expressed hope that within the next days the sides would be able to write the first draft of the overarching deal “which includes all points.”

The next round of talks between the two sides would be held in a European country but the exact date has not been determined yet.