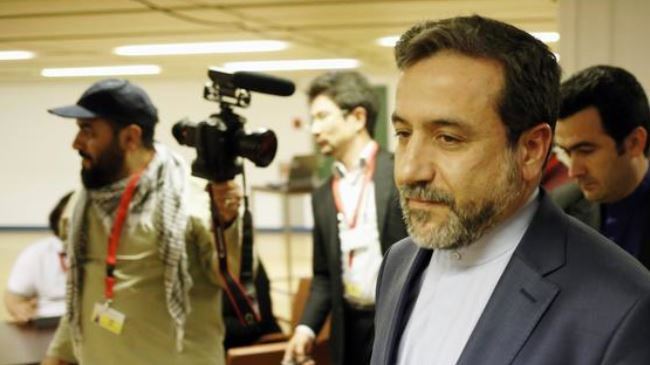 There will be bilateral negotiations between delegations from the Islamic Republic and its negotiating partners in Geneva two days prior to the start of the talks on December 17, 2014.

Senior Iranian nuclear negotiators are scheduled to head to Geneva for a fresh round of talks with the P5+1 group of world powers over Tehran’s nuclear energy program.

The Iranian delegation, which will be led by Deputy Foreign Ministers Abbas Araghchi and Majid Takht-e-Ravanchi, is slated to leave Tehran for the Swiss city of Geneva on Monday.

On Thursday, Araghchi said the next round of talks between Tehran and the P5+1 group — Russia, China, France, Britain, the US and Germany — will be held at the deputy level.

The Iranian official added that there will be bilateral negotiations between delegations from the Islamic Republic and its negotiating partners in Geneva two days prior to the start of the talks on December 17.

In their last round of talks, Iran and the P5+1 countries wrapped up a week of intense closed-door nuclear negotiations in the Austrian capital of Vienna on November 24. The negotiations aimed to tackle the remaining obstacles that exist in the way of reaching a final agreement, but despite some progress, the two sides failed to clinch a deal.

At the end of the talks, Iran and the six countries decided to extend their discussions for seven more months. They also agreed that the interim deal they had signed in Geneva last November remain in place during the remainder of the negotiations until June 30, 2015.