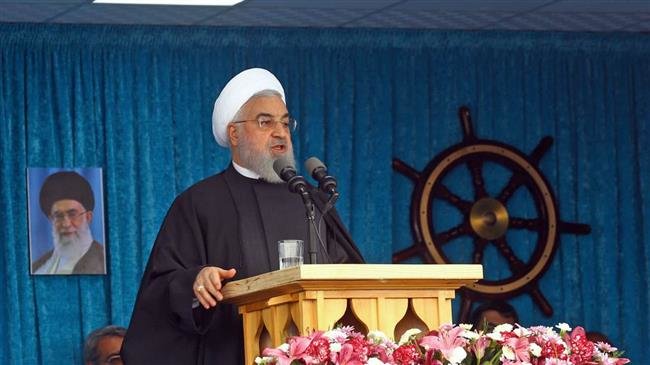 President Hassan Rouhani says the Iranian nation will “undoubtedly avenge” a recent terrorist attack that killed over two dozen members of the Islamic Revolution Guards Corps (IRGC), regretting the “wrong” policies of some of Iran’s neighbors.

He made the remarks on Sunday in an address to a large crowd of people in the port city of Bandar-e Lengeh, in southern Hormozgan Province.

“Terrorists,” President Rouhani said, “should know that our nation will undoubtedly avenge the blood of these dear martyrs.”

An explosives-laden car rammed into a bus carrying IRGC personnel in Sistan-and-Baluchestan Province earlier this week, killing 27 of them and wounding 13 others. The so-called Jaish ul-Adl terrorist group, which is linked to al-Qaeda, claimed responsibility for the assault.

“We do not and will not allow the criminal mercenaries, who are armed and funded by outsiders and who killed our dear IRGC forces and brave border guards, to escape revenge,” President Rouhani stressed.

Various civilian and military Iranian officials have in the wake of the Wednesday terrorist attack used unprecedented rhetoric against the government in Islamabad for harboring terrorists, who routinely stage attacks against Iran from inside Pakistan and then retreat into Pakistani territory.

President Rouhani said, however, that Iran sought brotherly and cordial relations with all countries, adding that Iran had never initiated any aggression.

Elsewhere in his remarks, the Iranian president said those regional governments that believe the United States and the Israeli regime can bring them security are “terribly wrong.”

He also denounced attempts by certain powers to sow discord among various ethnicities, religions, and nations in the Middle East.

The president said the region did not need US presence, saying the sooner foreign forces pulled out of the region, the greater stability and security would follow.