Iran not pressed for time over nuclear deal: Iran 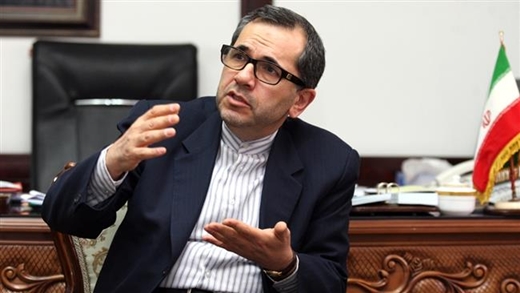 If the other side does not put forth excessive demands, nuclear negotiations will lead to a result by the announced deadline, deputy FM Majid Takht-e Ravanchi said.

An Iranian nuclear negotiator says the Islamic Republic will not be pressed for time in reaching a final comprehensive agreement with the P5+1 group of powers over Tehran’s nuclear program.

“If the opposite [negotiating] side does not come up with excessive demands, the negotiations will lead to a result by the announced deadline,” Iran’s Deputy Foreign Minister for European and American Affairs Majid Takht-e Ravanchi said in a meeting with Chairman of the European Parliament’s Committee on Foreign Affairs Elmar Brok in Tehran on Sunday.

He urged the negotiating parties to remain committed to previously reached agreements.

“The Islamic Republic of Iran is determined to push ahead with the negotiations seriously and strongly and make all-out efforts to reach a good, reasonable and acceptable agreement,” the Iranian negotiator said.

Takht-e Ravanchi also stressed the importance of reciprocal visits by delegates from Iran and the European Parliament with a view to enhancing mutual understanding and improving ties.

He expressed Iran’s readiness to strengthen cooperation with Europe in the fight against terrorism and extremism, regional security, commercial exchanges and energy supply.

Brok, for his part, expressed hope that Iran and the P5+1 would succeed in settling differences and reaching a final agreement, saying it would open a new chapter in ties between the Islamic Republic and Europe in all sectors.

He added that the European Parliament is keen to improve relations with Iran.