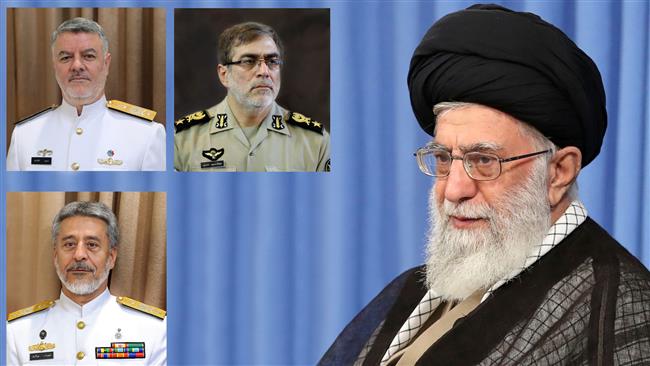 Leader of the Islamic Revolution Ayatollah Seyyed Ali Khamenei has made three new appointments in the Iranian Army.

In a decree on Sunday, Ayatollah Khamenei appointed Brigadier General Mohammad Hossein Dadras as the new second-in-command of the Iranian Army.

The Leader stated that the installation was made in view of loyal services and work experience of Dadras, urging him to boost the intelligence and operational preparedness of the Army.

In another decree, the Leader named Rear Admiral Habibollah Sayyari as the deputy chief of the Army for coordination.

The Leader urged Sayyari to increase the efficiency and agility of the Army to meet its key needs and promote coordination, coherence and synergy across various sections of the Army.

Ayatollah Khamenei also thanked Dadras, who previously held the post, for his endeavors.

The Leader, in another directive, designated Rear Admiral Hossein Khanzadi as the new Navy commander.

Ayatollah Khamenei said the appointment was made due to Khanzadi’s track records and urged him to make the utmost use of capabilities and capacities of the Army, the Armed Forces and the country to promote the Iranian Navy through firm determination, hard effort and constructive interaction.

Ayatollah Khamenei thanked Sayyari for his relentless efforts during the time that he held the post.

The Leader said in the decrees that the appointments were made upon a proposal by Commander of Iran’s Army Major General Abdolrahim Mousavi.