Iran, Kuwait Eye Enhanced Ties in Defiance of US Pressures 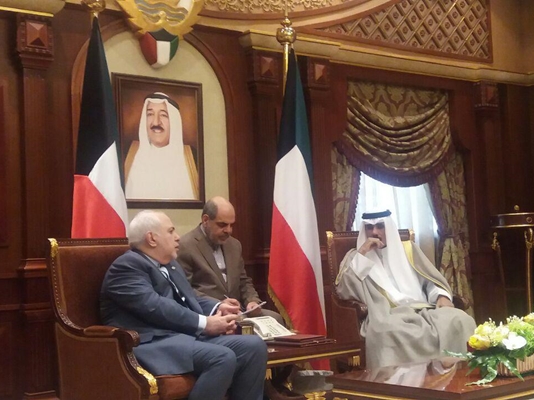 In the Sunday meeting, the Kuwaiti crown prince extended Zarif a warm and friendly welcome, and said the Kuwaiti Emir was very interested in meeting the Iranian top diplomat, but the meeting could not take place over the latter’s illness.

The Kuwaiti official said regional interests are above and more important than anything, adding, “We are always prepared for cooperation and dialogue, and consider it to be in the interest of the region and its security and stability.”

Zarif, in turn, wished health and speedy recovery for the Kuwaiti Emir, and described him as one of the prudent leaders of the region.

He described as friendly and brotherly the relations between Iran and Kuwait, and called for deepening and development of reciprocal ties.

He also highlighted the necessity for cooperation among regional countries given the ongoing developments, and said, “We and you will remain in this region, and the outsiders will leave.”

The Iranian top diplomat arrived in Kuwait on Saturday for a one-day visit.

Last night, he held talks with members of Kuwait-Iran Friendship Association, where they conferred on a broad range of issues, such as the friendly and age-old relations between Iran and Kuwait.

They also exchanged views on regional issues including the Palestinians’ conditions, the necessity for cooperation in the Persian Gulf, the current situation in the region, and the US’ economic terrorism against people of Iran.