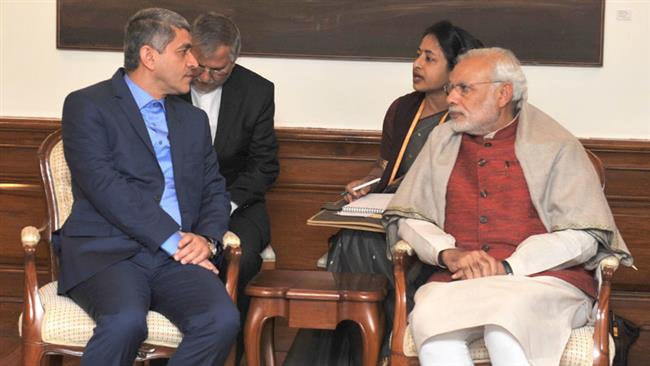 The Indians are willing to cooperate with the Islamic Republic in the development of Chabahar port in southern Iran and the construction of a rail network to connect India to Central Asia.

High-ranking officials from Iran and India signed a “comprehensive” agreement on economic cooperation, as part of efforts to boost trade relations between the two Asian countries.

Speaking after the signing of the 73-article deal, Tayyebnia said the agreement is a major stride in the promotion of economic relations between the two countries.

He further emphasized that the Indians are willing to cooperate with the Islamic Republic in the development of Chabahar port in southern Iran and the construction of a rail network to connect India to Central Asia.

Tayyebnia also said according to an article of the agreement, India will open a credit line for Iran to boost cooperation in various fields of energy, including petrochemicals, oil and steel industries.

In an earlier meeting in New Delhi attended by Tayyebnia and senior economic officials from India, a joint economic committee was inaugurated in a bid to stimulate bilateral trade and encourage the two countries’ merchants to make more investment.

Speaking in the ceremony, the Iranian minister said stronger trade ties between Tehran and New Delhi will contribute to their economic growth.

He further expressed the hope that termination of anti-Iran sanctions under a July nuclear deal between Tehran and six world powers would double the volume of trade between Iran and India.