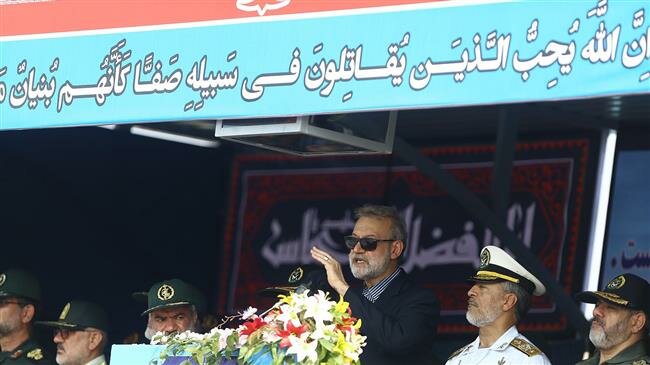 Iranian Parliament Speaker Ali Larijani says Iran is a friend of regional nations while Israel is the main enemy of Muslim countries.

Speaker Larijani made the remark during a speech in the southern port city of Bandar Abbas before a military parade began on Sunday.

“The Iranian nation and its self-sacrificing Armed Forces view all Muslim nations as their brother and consider those countries’ might the might of Islam, and regard the usurping Zionist regime (Israel) as a cancerous tumor in the region,” the top Iranian parliamentarian said. “The main reason behind insecurity in the region and the main enemy of Muslims is this very regime (Israel).”

Security in the Persian Gulf and the Strait of Hormuz is only achievable by regional countries, he emphasized, warning, “The presence of foreigners will inflict irreparable damage on the security structure of this international pathway.”

Larijani denounced the United States-led naval mission to allegedly provide security in the Strait of Hormuz as “a new tool to plunder the region,” and said regional countries themselves were capable of ensuring that security.

The US has been trying to persuade its allies to join the maritime coalition ever since it blamed Tehran for two separate attacks on oil tankers in the Gulf of Oman in May and June. Iran rejected the accusation, which the US leveled without offering any evidence.

Most of the US’s allies have snubbed the plan, which they say will lead to tensions with Iran.

Larijani referred to the US-led mission as an act of adventurousness which he said the Iranian Armed Forces would not allow to happen.

He censured the US and its allies for looking at Muslim countries as a tool for plundering the region.

“We believe that oppression, theft [of resources], bloodshed, and fratricide in the region amount to oppression against the entire Muslim nation, and the warmongering in Yemen is of that nature,” the Iranian Parliament speaker said, referring to the Saudi-led war on Yemen.