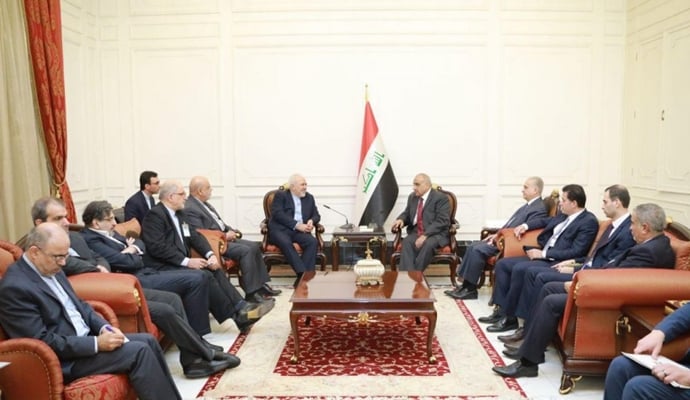 Iran’s Foreign Minister Mohammad Javad Zarif, who is in Baghdad at the head of a high-ranking politico-economic delegation, met with Iraqi Prime Minister Adil Abdul-Mahdi and his Iraqi counterpart Mohammad Ali Alhakim on Sunday evening.

The Iraqi prime minister, in his meeting with Zarif, underlined his country’s eagerness to establish best relations with all neighboring countries including Iran.

Iraq is looking forward to a better future of ties with Iran, a statement by the Iraqi premier’s office quoted Abdul-Mahdi as saying.

He voiced his satisfaction with talks recently held by the Iraqi President during his last visit to Tehran, expressing hope that sharing visits between the two countries’ officials would result in promoting bilateral ties.

For his part, Zarif stressed his country’s support for Iraq and its government so as to enhance the country’s political and democratic path as well as boost bilateral ties in all fields.

In a separate meeting, Zarif and his Iraqi counterpart also reviewed bilateral relations and stressed the need to enhance ties with a focus on common grounds and expand economic, trade and industrial cooperation between the two sides.

The ministers also talked about regional issues, particularly Syria, Yemen and other challenges facing the Middle East. The two sides highlighted the need for supporting the legitimate demands of the Palestinian people and their right to return to their homeland.

The two officials also discussed facilitating the travel of people and businessmen, connecting Iran and Iraq’s railroads, the unilateral US sanctions, and facilitating shipping at the border river of Arvand Rud.

The Iranian foreign minister, in turn, praised the unique role of religious authorities and political leaders of Iraq in protecting the security, stability and territorial integrity of the Arab country.